Let’s be honest, the Harry Potter movie has been everyone’s favorite since its release. Well, not only its movies but also its books and characters always amaze us with its storyline and the foremost thing, its comedy scenes. And as of now, as we all are living in a world of the internet, where we will find millions of Harry Potter fans, funny Harry Potter memes and Tweets are gaining fame rapidly day by day.

But also, the internet is being flooded by lame things related to these fantastic series. That’s why we decided to gather all of the top best Harry Potter tweets and memes in one place so that you all can enjoy your free time with your favorite Harry Potter character’s meme without having any struggles finding it. 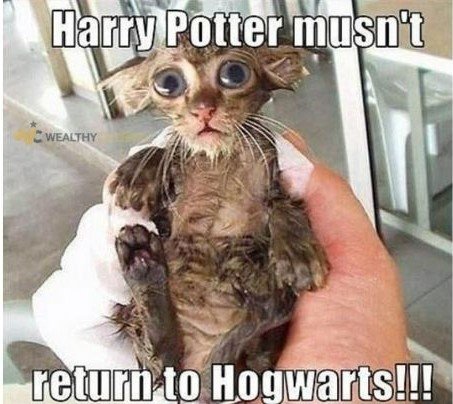 This is one of the top best funny memes jokes of Harry Potter from Harry Potter and the Chamber of Secrets. In this part of the series, Dobby the house-elf was newly welcomed and was commanded to save Harry’s life. And while keeping this in mind, one of Harry Potter’s fans posted a meme where a funny kitten is telling Harry’s fellows, “Harry Potter mustn’t return to Hogwarts!!!”

2- Get With The Times 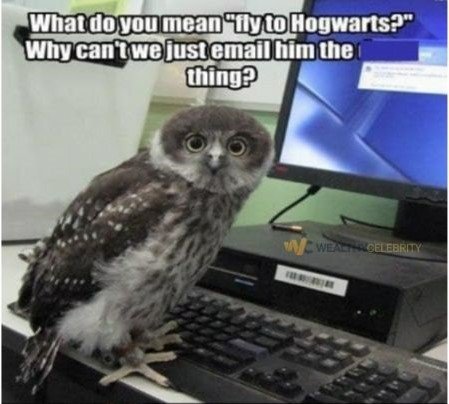 Many Harry Potter Hogwarts fans must understand this meme at the first glance. This is because since Hogwarts got released, people have been dying to have a letter from Hogwarts. And while knowing that people would love the idea of “What do you mean ‘Fly to Hogwarts?’ Why can’t we just email him the thing?’ One of Harry Potter’s fans posted this hilarious meme on the Twitter application. 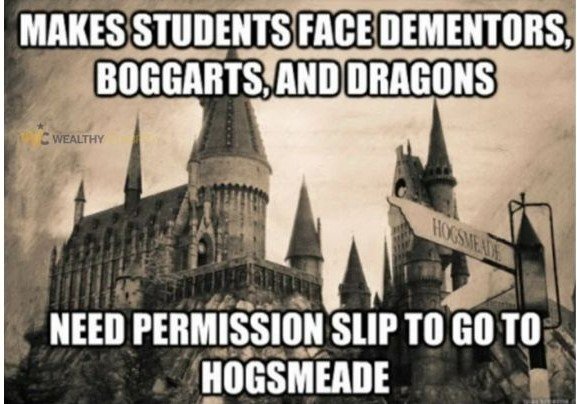 In this one of the funny Harry Potter house memes, we can see that the professors are making pointless Hogwarts School of Witchcraft’s rules. Also, you can laugh about the lines that these memes include, which reads, “Makes students face Boggarts, dementors, and even dragons need a permission slip to go to Hogsmeade.”

4- Because That’s Not Noticeable At All 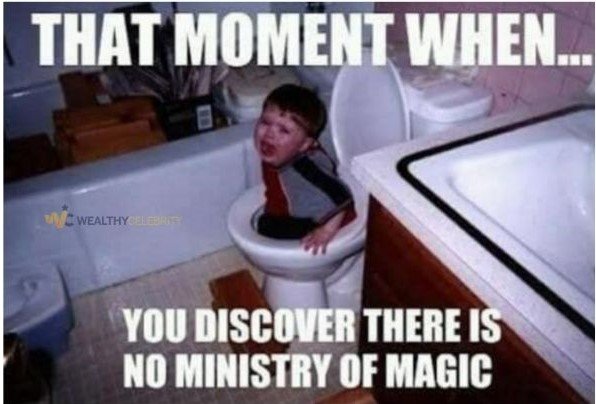 In this one of the best hilarious Harry Potter memes, the creator described the true feeling of Harry Potter fans when they realize that the mystery of magic no longer exists because of this modern world. 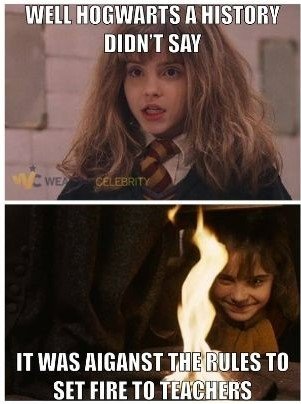 The meme that you are seeing above mentions the famous book wizarding world, Hogwarts: A History. In this meme, we can see our favorite character from Harry Potter, Hermione, is being hilarious in an evil way while burning the Hogwarts book by saying, “Hogwarts A History didn’t say it was against the rules to set fires to professors.” 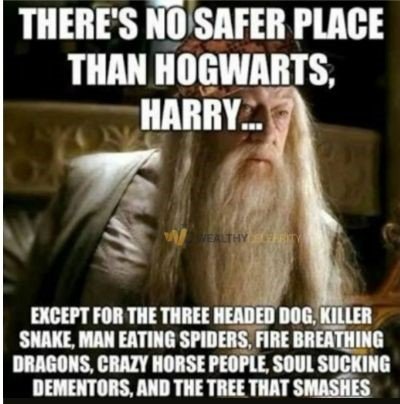 Even though Hogwarts School of Witchcraft and Wizardry was completely safe, its breathtaking creatures did a lot of damage to our Harry Potter characters. That’s why one of the Harry Potter tweets die heart fans made this extraordinary meme that is undoubtedly hilarious. 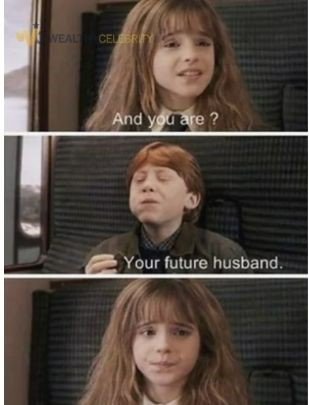 We love this couple of these cuties from the Harry Potter series and especially the adult dirty Harry Potter memes in which these to join in are something more than just ‘Amazing.’ 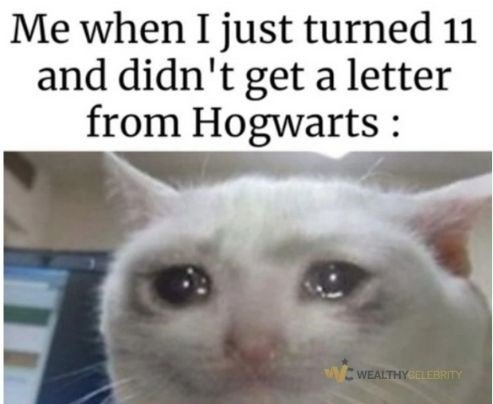 Screaming and crying? Well, stop doing that because Hogwarts will never send you an invitation to join its team. Anyway, jokes apart, this meme is based on a crying cat who is continuously crying while being named with the words, “Me when I just turned 11 and didn’t get a letter from Hogwarts.” 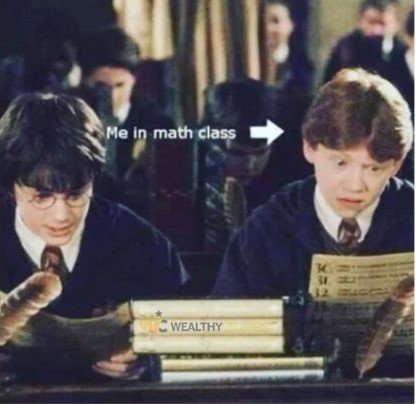 Ron Weasley will always stay as the most adoring and weird character from the Harry Potter movies. He is famous for being not the best student and relying on Hermione Granger for assistance. Well, this is one of the best funny harry potter memes that can easily make any Ron fan laugh. 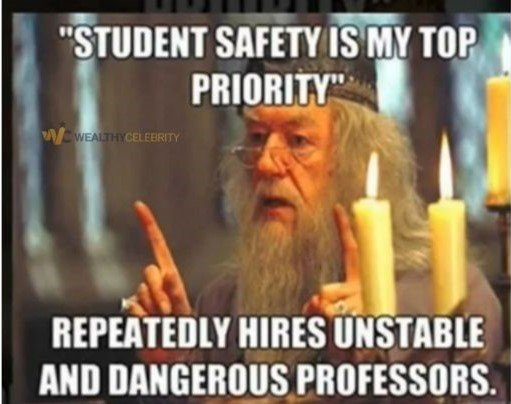 This is the last but one of the best Harry Potter memes for kids where we can see the Hogwarts head professor Dumbledore is telling his students that safety is his priority, but still, he hires dangerous teachers in his institute.

It’s strange because Harry Potter forgot about the other people who exchanged their lives, such as Remus, Tonks, Fred, or Mad-Eye. That’s why he simply decided to name them Snivellus and Luna.

Thinking about what it is? Let us explain. This is a sorting hat that we can find at Hogwarts. This hat helps the Hogwarts people to decide about where the new member will live from four houses, and their names are Gryffindor, Hufflepuff, Ravenclaw, and Slytherin. 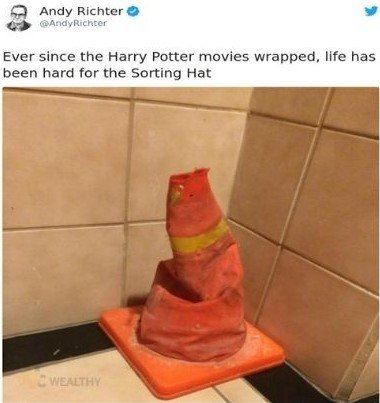 Instead of living and spending most of his days in a good bedroom, Harry simply decided to live in the cupboard under the stairs. Also, Harry’s room is a place where professors send him as his punishment without knowing that he sleeps over there. 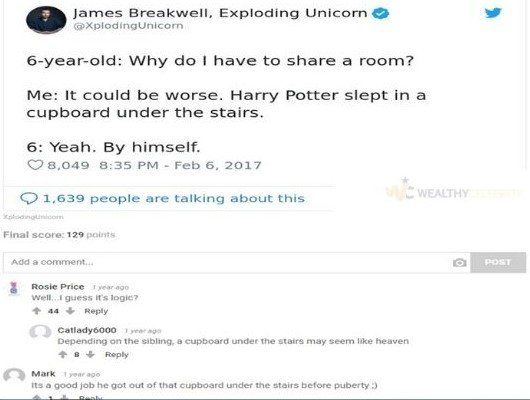 Since day one, all of the Harry Potter wallpapers, quotes, books, and movies have made a great impact on viewers. But recently, the young generation started to make memes and funny tweets by using Harry Potter characters which took the whole internet by storm. And as the internet is now flooding with some lame stuff as well, we compiled the top ten best funny Harry Potter memes and tweets. We hope you liked them!

A. Student Safety is the most nosy and hilarious part of Harry Potter. This harry potter memes clean got famous because of Dumbledore's decision-making.

Q. What are the best Harry Potter memes?

A. We're good is the best Harry Potter meme that shows a snake lifting itself off the base and counting against a door. This meme is the best one that cracks a joke about a snake.

Q. What are the funniest Harry Potter memes?

A. Above, we have put together a huge collection of Funny Harry Potter memes that you can use as an antidote to put a smile on your face. Take a look at the above article.

Q. What are the Harry Potter memes with Hermione?

A. "The Dance" is the best scene between Harry and Hermione inside the tent after Ron leaves. People have made great and crazy Harry Potter memes with Hermione on this scene.