Gordon James Ramsay is British by origin and is a renowned celebrity chef, food critic, restaurateur, writer, and television personality. He was born in Johnstone (Scotland), on November 8, 1966. He owns restaurants around the world and has also been part of famous television shows including “Hell’s Kitchen” and “Master Chef”.

Who is Gordon Ramsay?

Gordon started his career as an athlete (soccer player) but said goodbye to it because of a knee injury. After completing his hotel management degree in 1987, he rolled his sleeves to get in the market. He rolled himself under top chefs of the British to refine his skills. In 1993 he became head chef of newly opened “Aubergine”. In two years the restaurant got a two-star ranking by Michelin. In 1995 he was awarded “Prestige Catey Newcomer of the year Award”.

He opened his first restaurant in 1998. His ambition and hard work paid and he opened numerous restaurants throughout the globe. In the next fifteen years, he had his restaurant chain’s in Glasgow, Ireland, Dubai, Tokyo, Las Vegas, and the United States.

Starting his journey from London, he made his mark on British TV as a temperament host of “Ramsay’s kitchen nightmares” and “Hell’s Kitchen.” These shown made him renowned among American audiences. His success journey expanded and enabled him to be part of “Master Chef” and “Hell Hotel.” The strong ratings of these shows opened new dimensions for him, and he expanded to Atlantic by being part of the American version of “Hell’s Kitchen” on FOX. Later on, he also started a culinary series called “The F Word” leading to American production of “Master Chef” and “Master Chef Junior.” In 2012 he started another hit concept of saving a failing establishment with the name of “Hotel Hell.”

He was inducted into the “Culinary Hall of Fame” in 2013.

Gordon Ramsay got married in 1996 to Cyetana Elizabeth and has four children. Ramsay and his wife opened a charity named “Gordon and Tana Ramsay Foundation”

This celebrated British chef has a net worth of an estimated $190 million. He takes $225,000 per TV episode and an additional $10 million from media and restaurants. He has started judging his fan food on Twitter account in 2017 upon their request.

A wise thing that a successful man can do is to spread the thoughtful word of mouth profoundly known as Quotes. Gordon is among such a wise man who has enlightened people with his inspirational quotes. Let’s have a look at some of the famous quotes from Gordon Ramsey.

Being one of the most famous chefs, Gordon has several pieces of advice and sayings to motivate people to cook. Let’s go through the passionate quotes from Gordon on cooking.

Check out this fantastic collection of Chef Gordon Ramsay quotes wallpapers below: 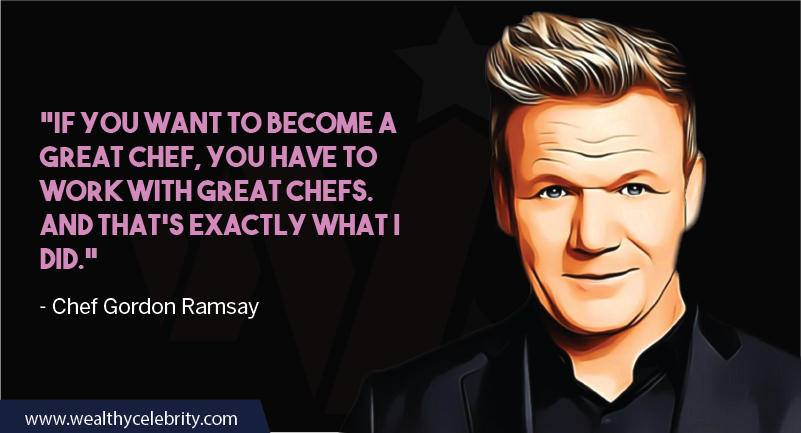 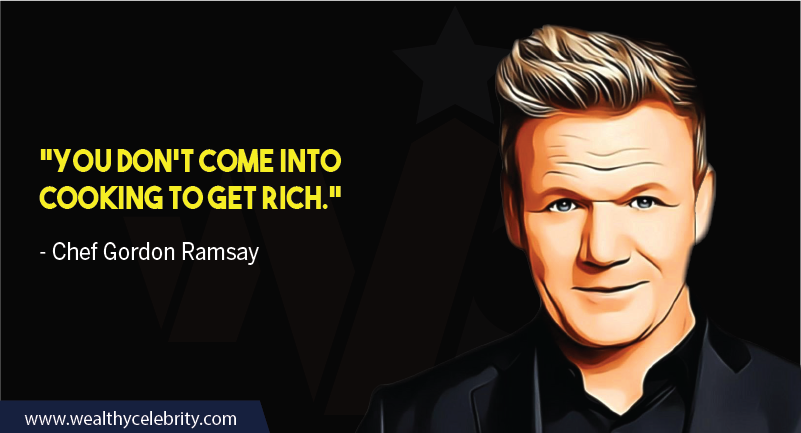 Gordon Ramsay about cooking and getting rich 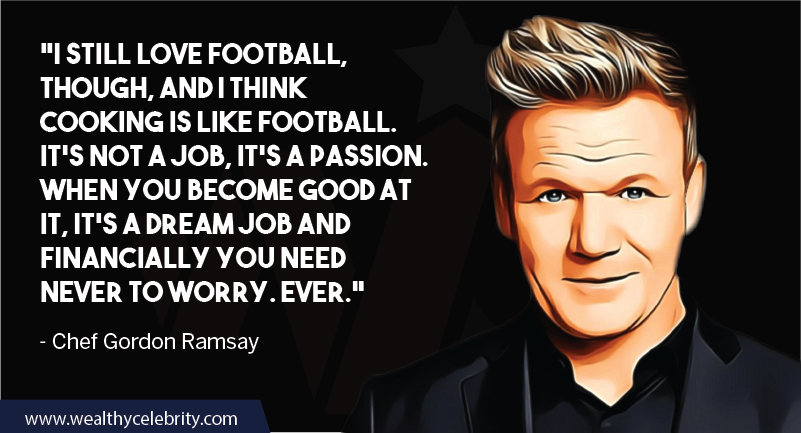 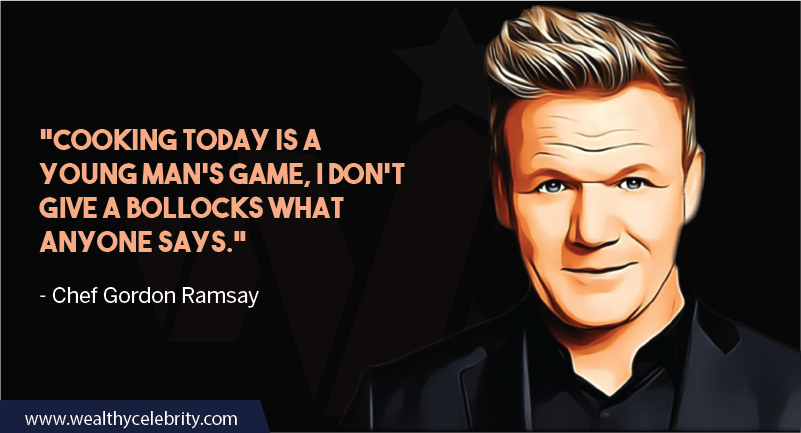 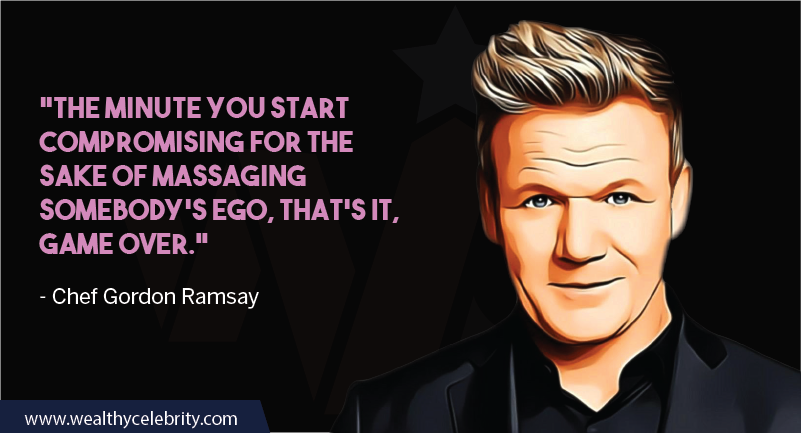 Gordon Ramsay about ego and compromise 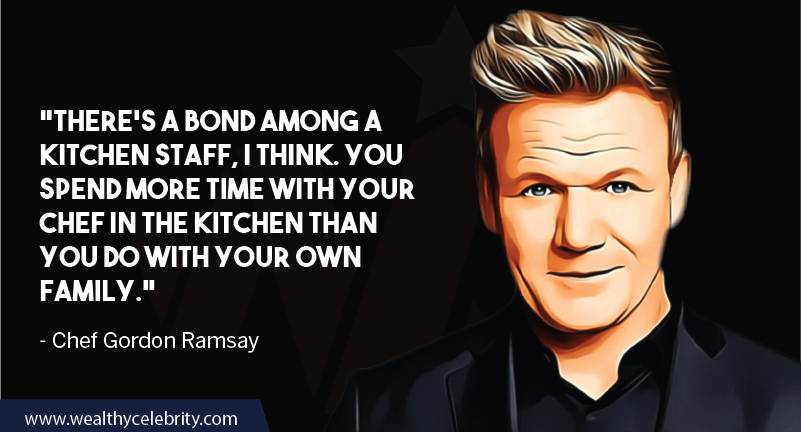 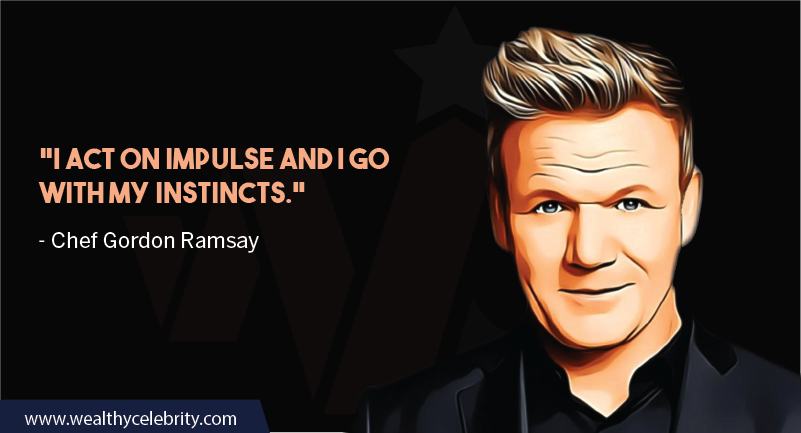 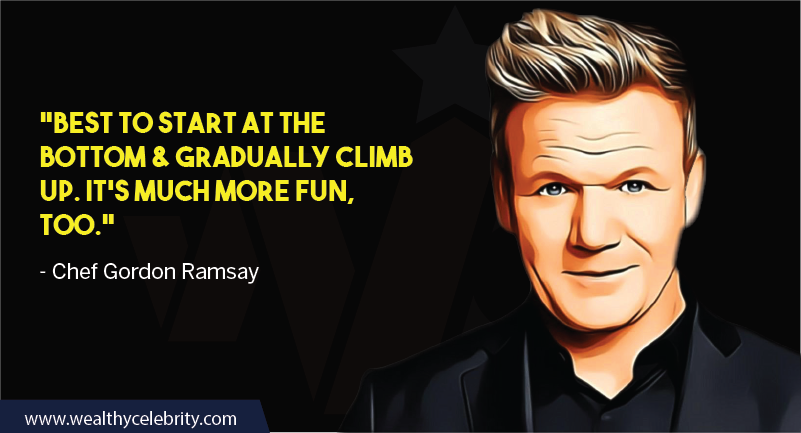 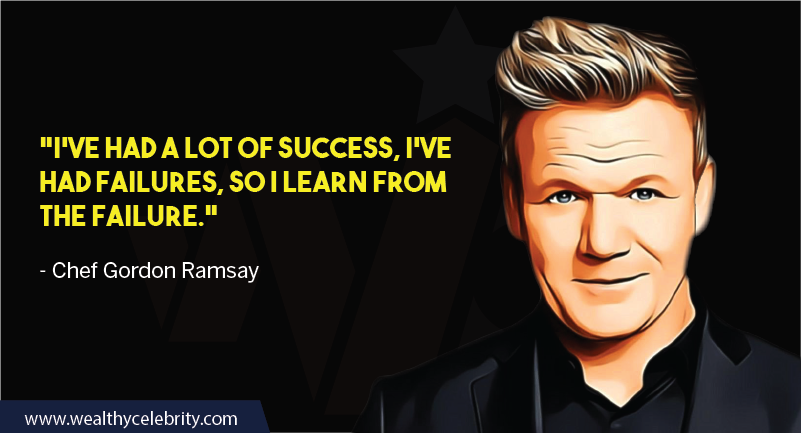 Gordon Ramsay about success and failure

Gordon Ramsay is among those who achieved success by attaining perfection in whatever he does. His journey provokes us to first-rate a mentor in life and then follow his footsteps. He worked under the sticklers of the culinary world to gain perfection. He appreciates the strugglers of the culinary field. His quotations are an inspiration to millions.

We hope you enjoyed the journey of Gordon Ramsey with us. Don’t forget to comment down on your favorite quote from Gordon Ramsay.