She is one of the most famous American rappers who is known for her amazing looks and beautiful voice as well as her considerably controversial political stands. But she’s not just a rapper, she is a mixed bag of so many amazing skills and attributes. For example, she is also known for songwriting, acting, being the “talk of the TV” and being an undaunted activist for the causes she believes in.

Cardi B’s net worth, as you’ve just read, is $40 million – behind which is a more interesting and inspiring story than the rags-to-riches stories that we’re so used to.

She actually started off with nothing and not only did she manage to make all this money, but she also started a family with another famous American rapper: Offset.

A Check Into Cardi B (Personal) Life Achievements 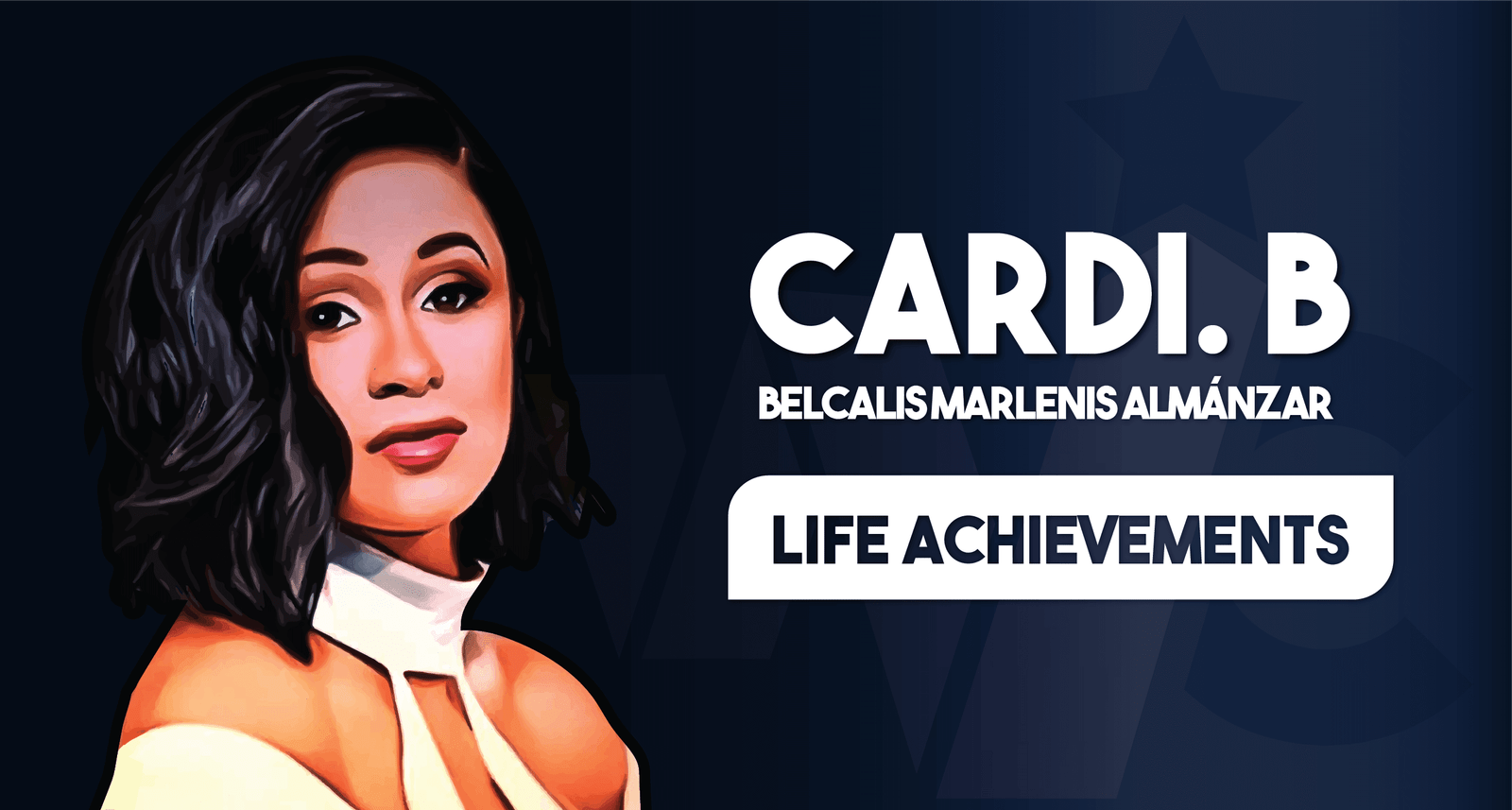 I bet that if you love Cardi B you want to know more about her than just her net worth. In this part, we will discover everything about her personal life and achievements in terms of career as well as family.

She Kept The Information About Her Parent’s Names Undisclosed 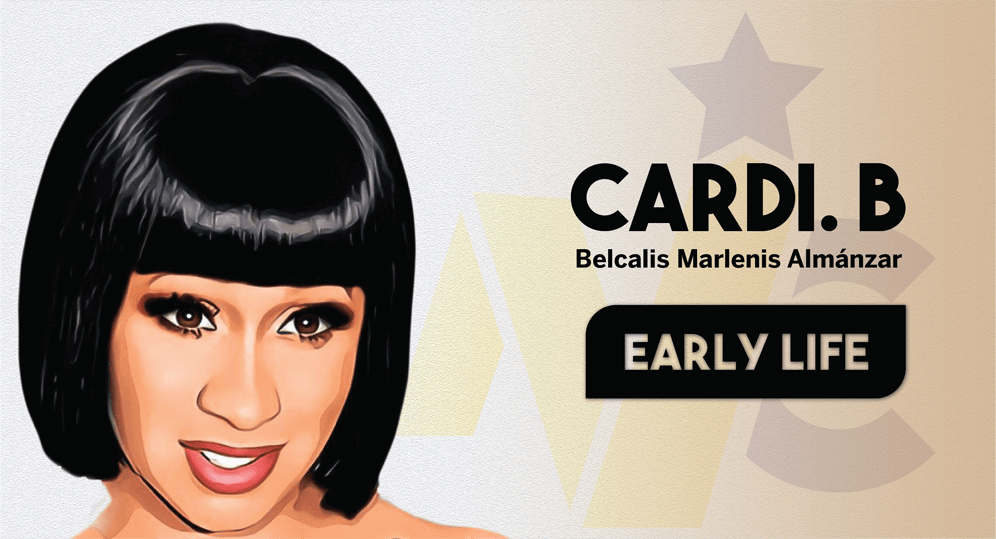 We do not know much about Cardi B’s early life because of even the names of her parents. All that we know about her early life is through her interviews or her website Cardi B Official.

Even her name is not the same as it used to be; her birth name was actually Belcalis Almanzar. She is called Cardi B for a very funny and interesting reason.

She has been through a lot (from stripping to gangs) and she loved a particular rum brand known as Bacardi.

The gang that she was a member of, was known as Bloods. She picked Cardi from Bacardi and B from Bloods and since then she’s been known as Cardi B.

Coming back to her parents, we do not know their names, but her father was Dominican, and her mother was from Trinidad. They raised her in Highbridge, South Bronx – but mostly it was her paternal grandmother from Washington Heights who took care of her.

She Started Her Career In An Amish Market In Tribeca 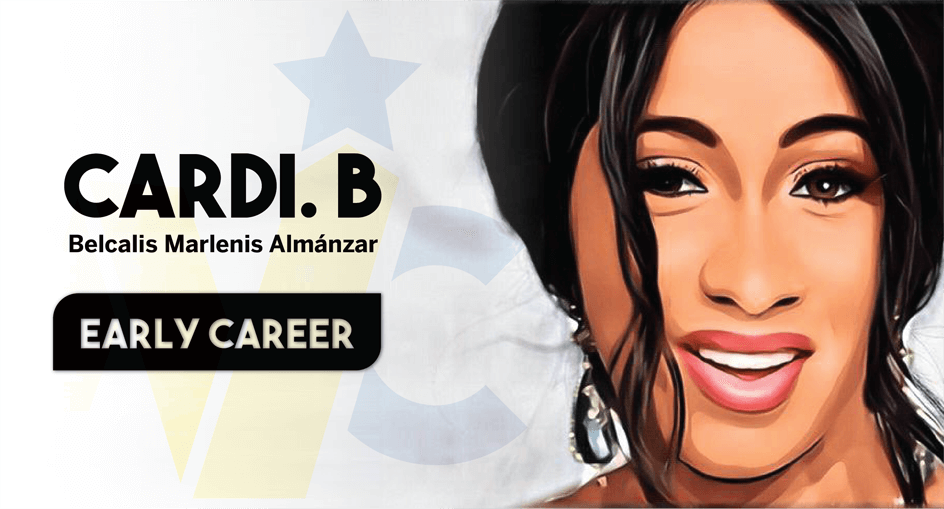 Well, Cardi B’s early practical life was not something that she’d be proud of. She was initially employed by an Amish market in Tribeca, but that did not last for very long.

At the age of 19, she started stripping to raise money. While some would consider this immoral, that helped her in many ways as she joined the school again and avoided domestic violence and other issues.

In 2015 she was cast by VH1 reality show Love & Hip Hop: New York. That was her debut entry in showbiz.

She left the show in 2016 after being one of the most important members of the cast.

She Have Dated Several Men In Her Music Career 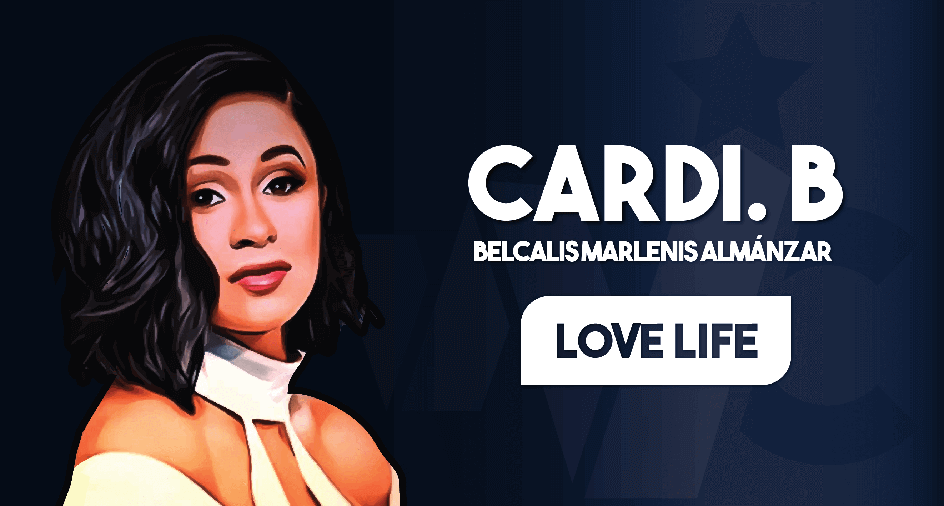 Cardi B had a very active love life before they fell in love with the famous rapper Offset and then married him.

Before doing that, she has been in a relationship with 3 or more men (that are known to the media).

Famous DJ Self is known as Cardi B’s first known and well-established ex-boyfriend. He and Cardi B were dating back in 2015.

Then she started dating King Yella. Although this is not confirmed, because King Yella made this claim after rumors of infidelity between Cardi B and Offset became known. However, Cardi B has rejected this claim.

However, a very well-known relationship is one between Cardi B and Love & Hip Hop co-star and rapper Tommy Geez.

Her Sister Is A Makeup Artist And Model 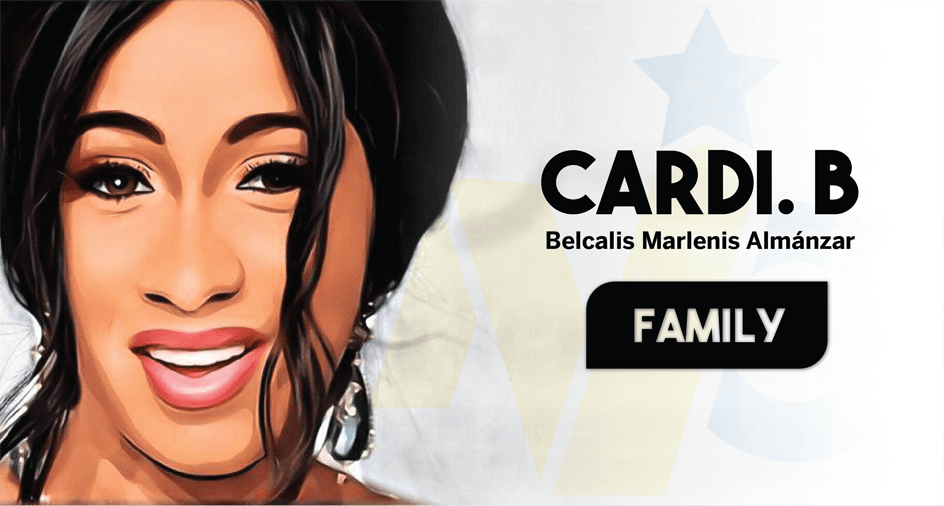 All these true and false love affairs only proved to be very temporary (as you can see that within the time period of 2015-2016, she had 3 or 4 (established or not) boyfriends.

It was back in 2017 that Cardi B met her then-boyfriend and now-husband Offset: another rapper.

They dated a lot and by the end of that year, both of them got engaged at a private Carmoney in front of a few fellow rappers, friends, and family members.

In 2018 both of them have gotten “secretly” married to each other. In the same year, due to an iCloud leak, a series of cheating scandals came known to the public.

In the same year, she let people know that she was expecting from his husband and she gave birth to Kulture – her only child so far.

Her only known sibling, Hennessy Carolina (sister) is a makeup artist and model.

Let’s Have A Peek Into Her Professional 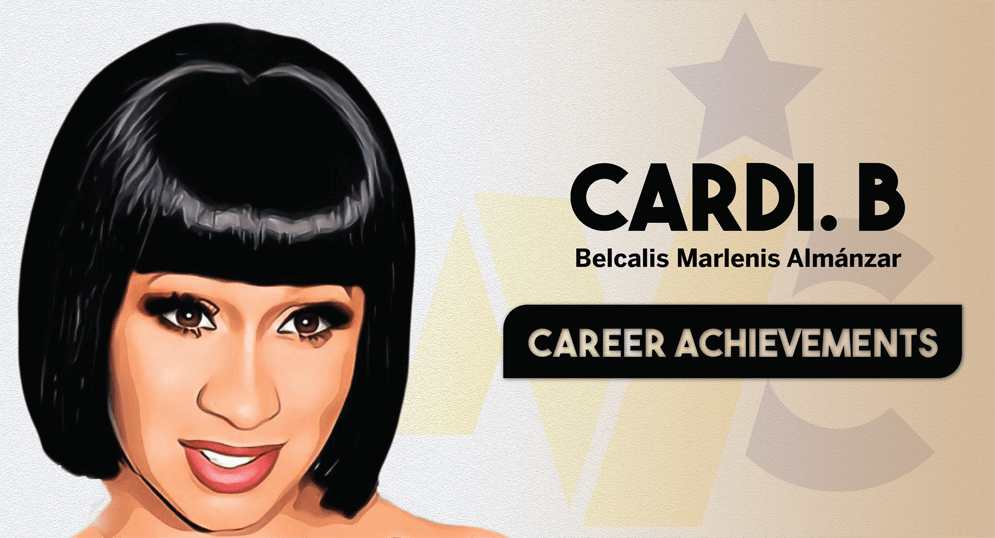 Her milestone career achievement, other than random hits, was her first and only studio album: “Invasion of Privacy”.

The album was released on April 6, 2018, and won universal acclaim from critics; it was called “one of the best powerful debuts of this millennium”.

Another big career achievement is her debut appearance in a Hollywood movie – loosely based on her own life – “Hustlers”.

An even bigger achievement, in her own field, is being picked as a judge for Netflix’s Rhythm + Flow 2019-2020. She is also the Executive Producer of this show whose aim is to find the USA’s next breakout hip-hop star. 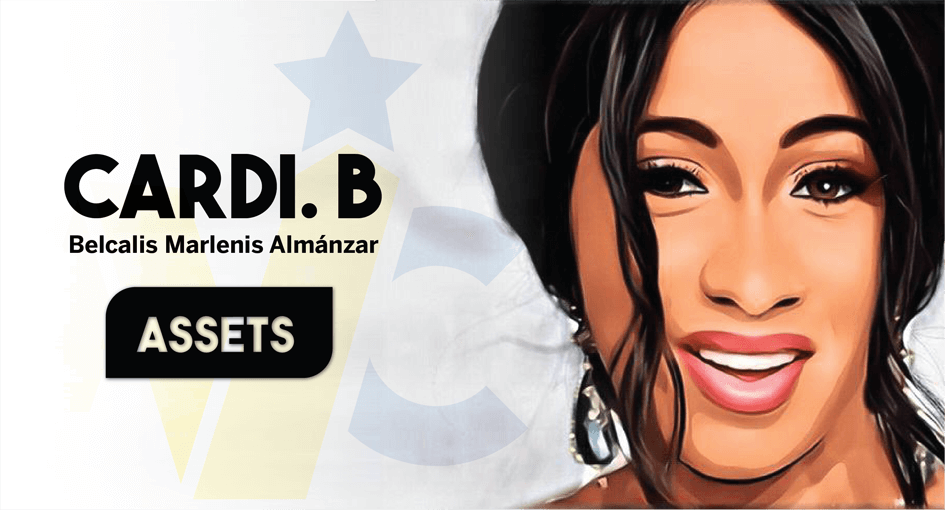 In December 2019 the duo purchased a big mansion in Buckhead, Atlanta, Georgia for $5.5 million. Likewise, in 2018, she told the media that she bought an expensive house for her mother, who supported Cardi the most whenever she was lacking the motivation to restart making music and not bother about what people say about her voice or features.

Cardi spends a major chunk of her money on real estate properties and cars. Other than the $5.5million+ mansion, the family owns many luxury cars, including Rolls Royce.

Well, she usually doesn’t drive her cars, as she always has a driver beside her, but when she is visiting a studio for making new music, she drives her Rolls Royce often.

Cardi B Best Quotes and Sayings

Here are the top 10 famous quotes of Cardi B about life, love & success: 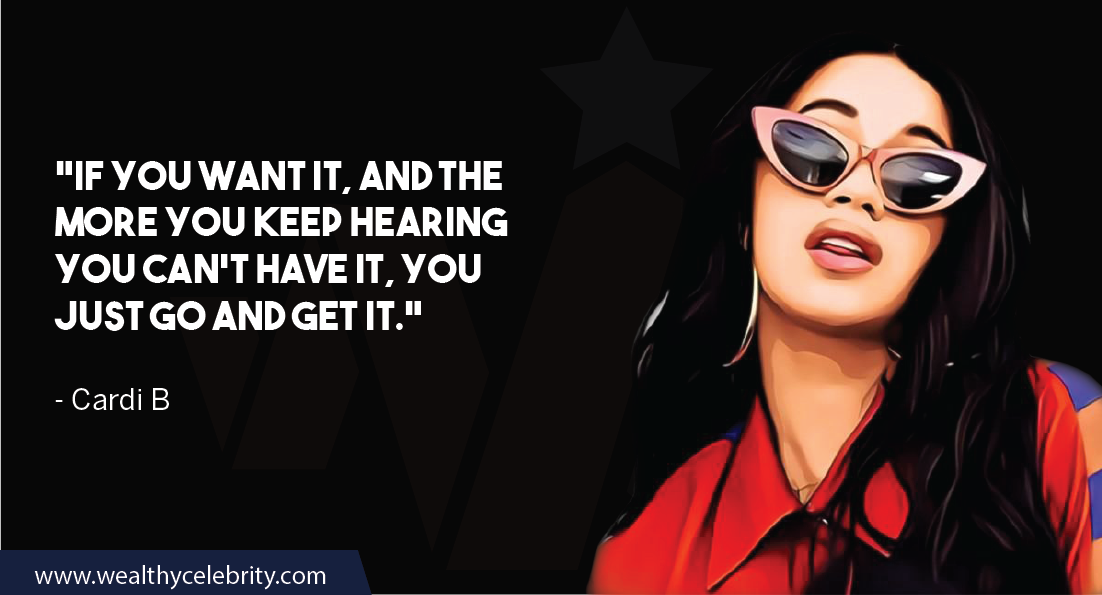 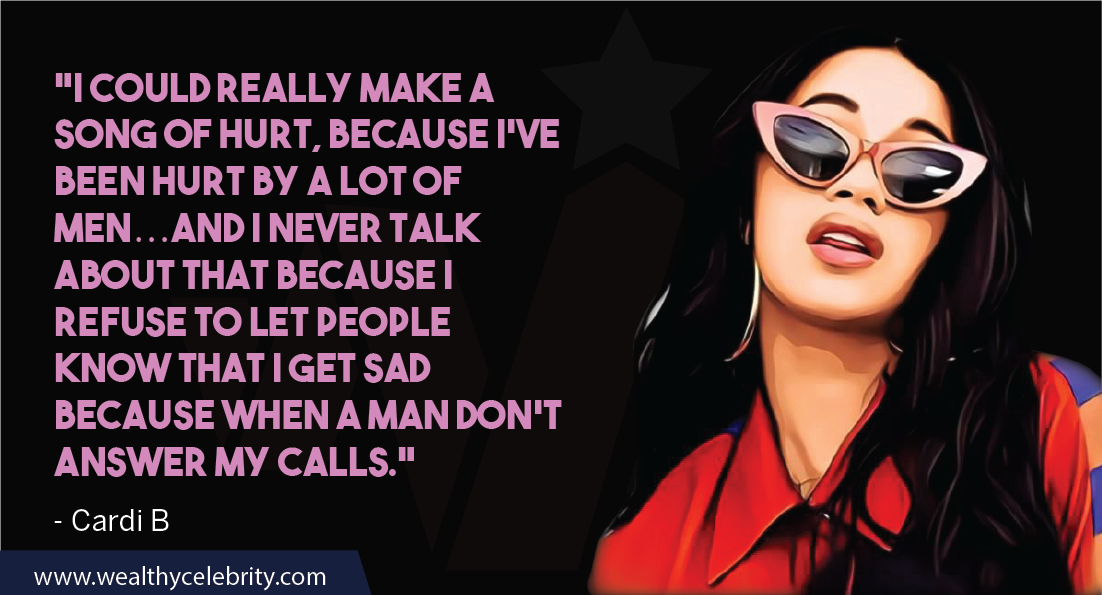 2. “I could really make a song of hurt, because I’ve been hurt by a lot of men…And I never talk about that because I refuse to let people know that I get sad because when a man don’t answer my calls.” 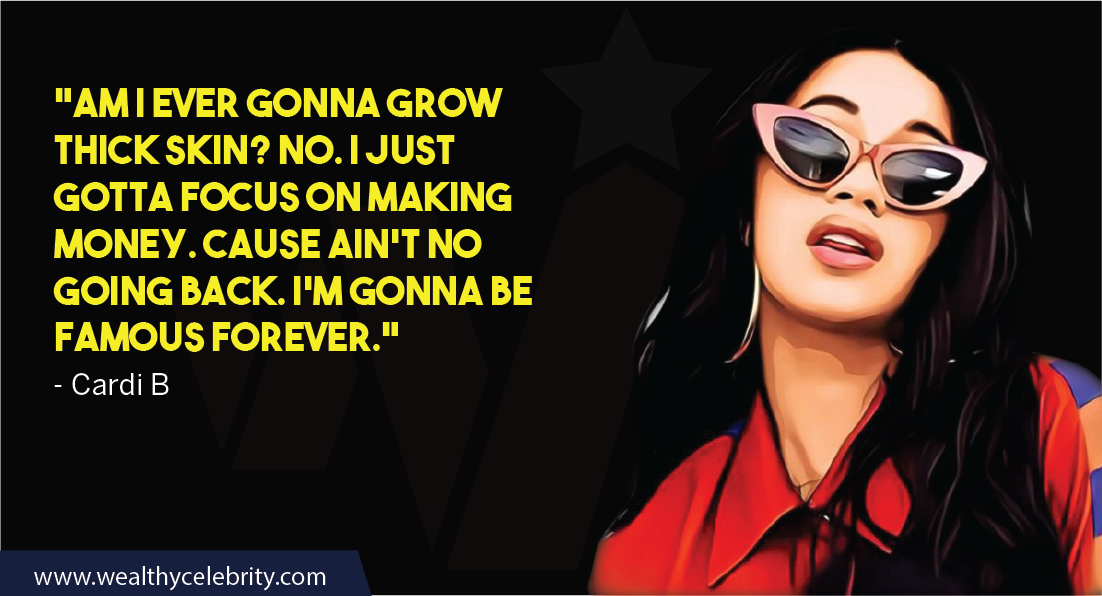 3. “Am I ever gonna grow thick skin? No. I just gotta focus on making money. Cause ain’t no going back. I’m gonna be famous forever.” 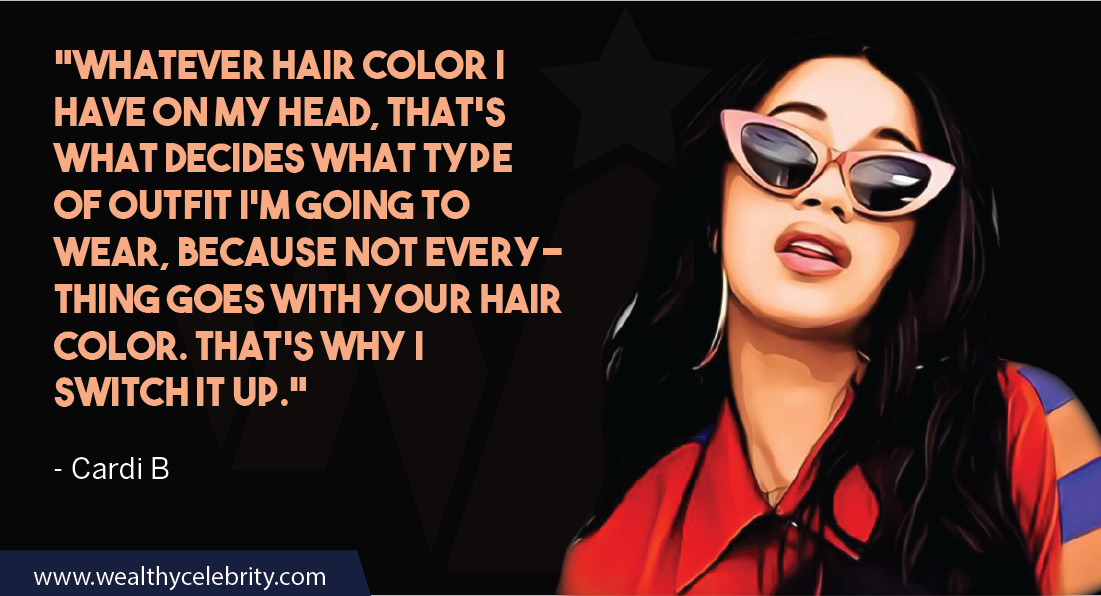 4. “Whatever hair color I have on my head, that’s what decides what type of outfit I’m going to wear, because not everything goes with your hair color. That’s why I switch it up.” 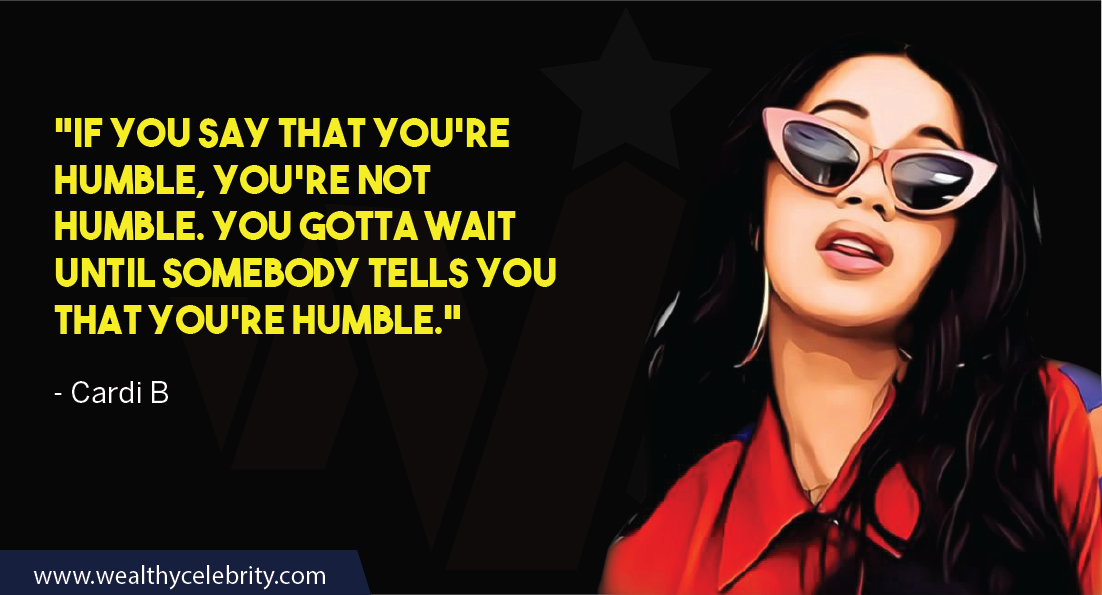 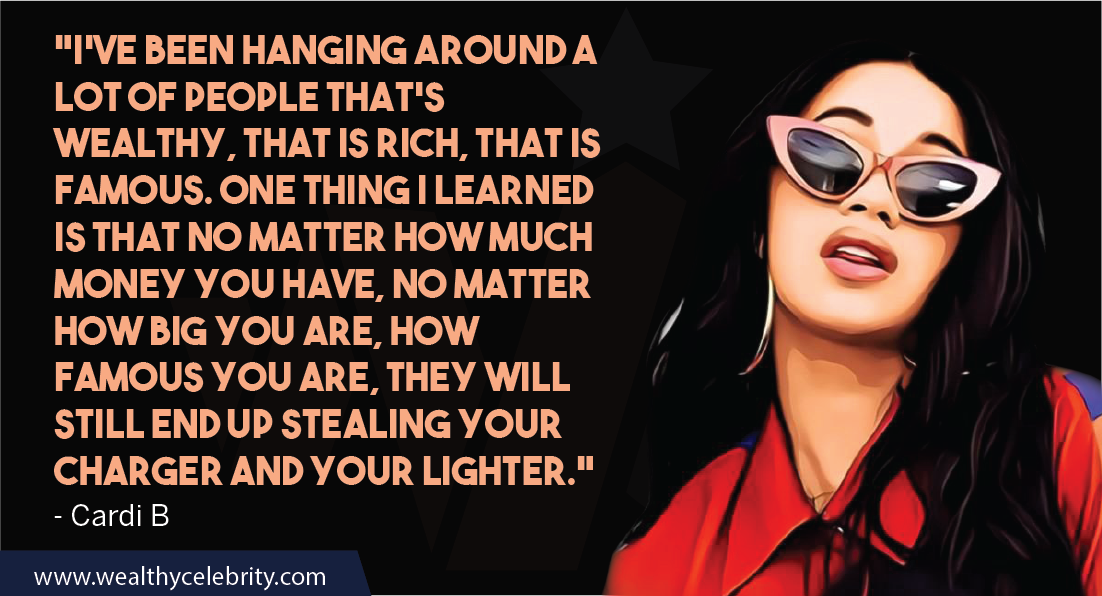 6. “I’ve been hanging around a lot of people that’s wealthy, that is rich, that is famous. One thing I learned is that no matter how much money you have, no matter how big you are, how famous you are, they will still end up stealing your charger and your lighter.” 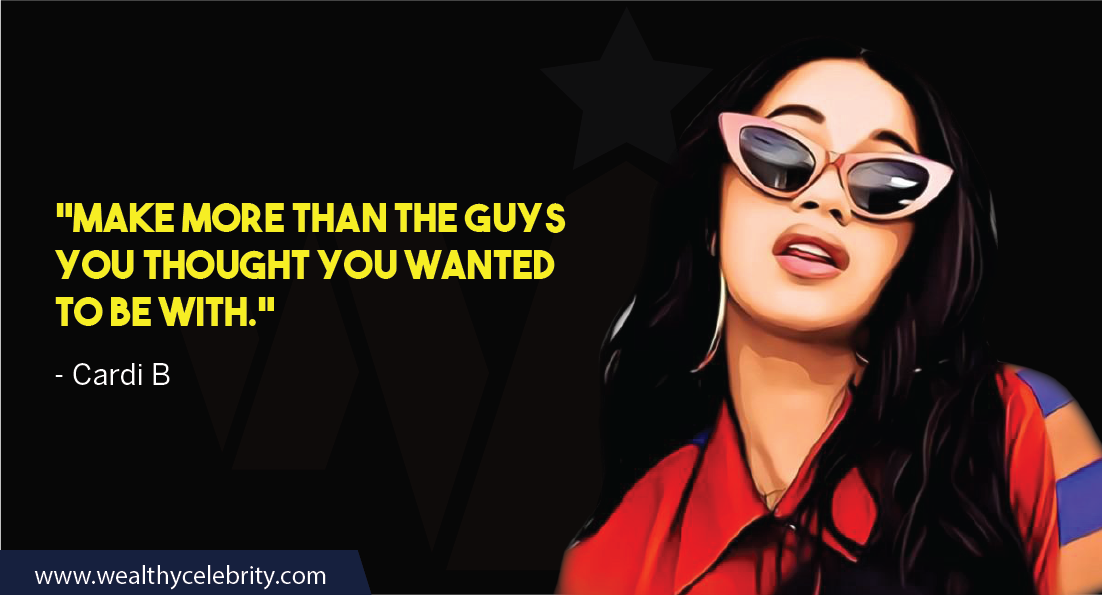 7. “Make more than the guys you thought you wanted to be with.” 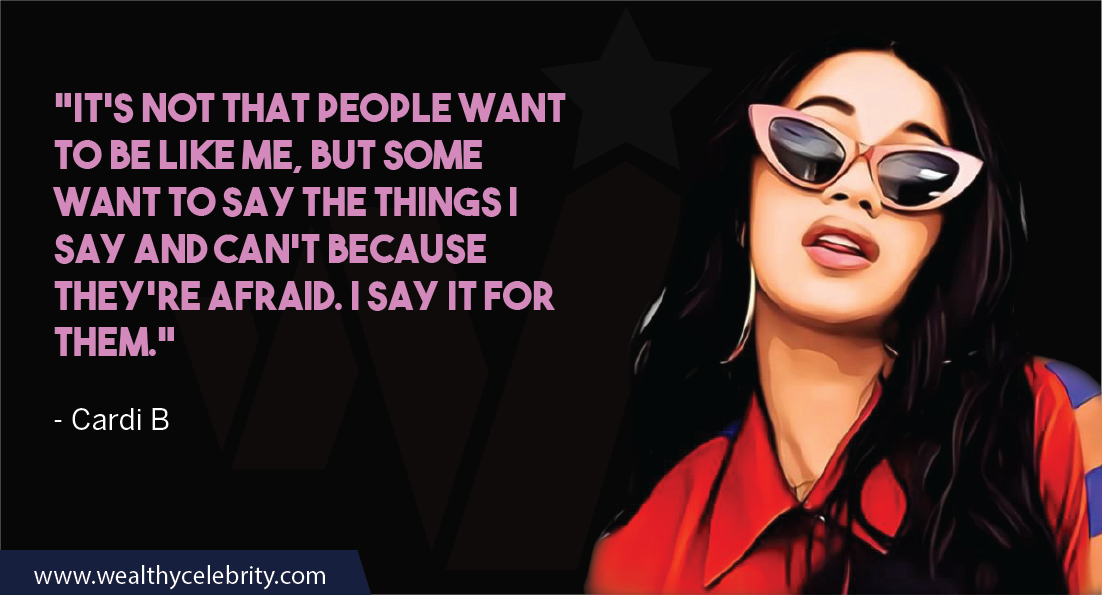 8. “It’s not that people want to be like me, but some want to say the things I say and can’t because they’re afraid. I say it for them.” 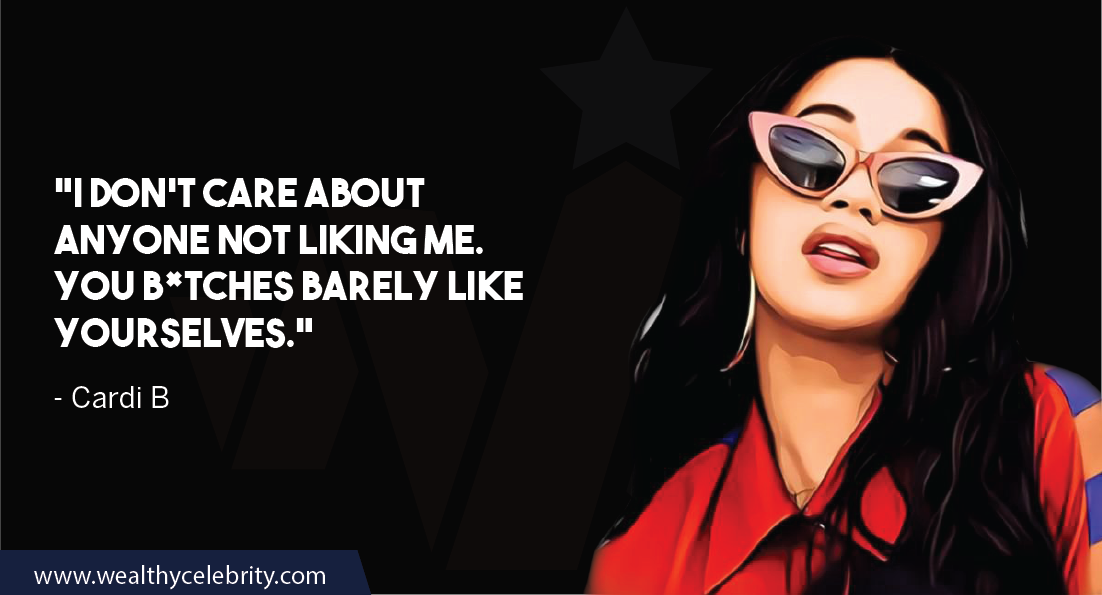 9. “I don’t care about anyone not liking me. You b*tches barely like yourselves.” 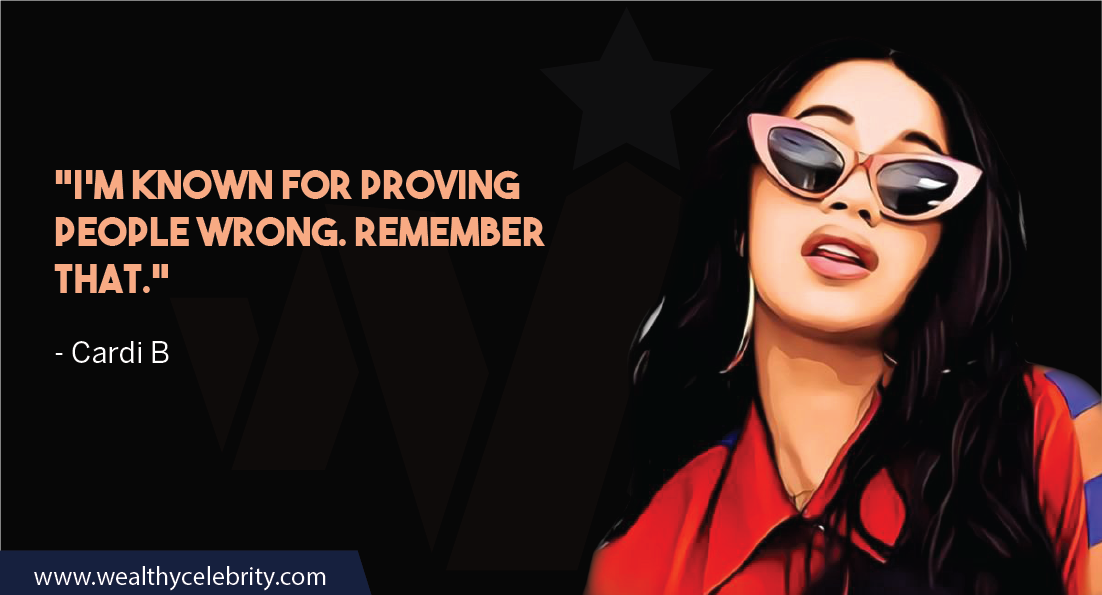 Here are some random highlights and interesting facts about her.

For example, she does not have a driving license until this date. Unlike her, her sister is just a low-key makeup artist and social media model. Her first job was that of a cashier at a market.

There are also some interesting quotes of her – the one that I love the most is,

“If you want it, and the more you keep hearing you can’t have it, you just go and get it.”

Interesting Facts About Cardi B

Q: Where are Cardi B parents from?

A: Cardi B's mother was from Trinidad and her father belongs to the Dominican Republic.

Q: Who was Cardi b's boyfriend?

Q: How many grammys does Cardi B have?

A:  Cardi B received 9 awards in her career.

Q: What is the birth name of Cardi B?

A:  Her birth name is Belcalis Almanzar.

Q: Why cant Cardi B drive?

A: She can't drive because she didn't have driving license. She has plans to write a song  about "the struggle" of not having a license.

In simple words, Cardi B’s life story is a better version of rags to riches. She wasn’t only poor, but she had to strip only to get basic education and to save herself from abusive relationships. Her career is still in making, but she will always be able to impress her fans because of the struggle she has got inside her.

Let us know what are your thoughts about Cardi B’s biography and Net Worth. Share your comments below.

[…] attention after collaborating with other renowned music artists as a rapper and singer, including Cardi B and […]

What Is Cardi B Net Worth 2022: Overview, Interview - FIDLAR

[…] Socha is one of the wealthy actresses, models, and television personalities of the British entertainment industry. Her estimated net […]