Kylie Jenner, the youngest Kardashian sister, is an American model, entrepreneur, media personality, trendsetter, and the most valued, as well as highest, paid Instagram influencer having over 196 million followers. She is also famous for being in a relationship with the renowned rapper – Travis Scott. Also, thanks to Kylie’s mad Instagram following, her cosmetics line Kylie Lip Kits, later renamed Kylie Cosmetics, was such a hit-making her almost a billionaire.

Being born and growing up in a star-studded family, Kylie has always been in the media limelight. In addition to that, she has been part of the reality television series Keeping Up with the Kardashians since her teen years.

Kylie Is One Of The Richest Young Female Entrepreneurs

Although Forbes had wrongfully declared Kylie Jenner the youngest ‘self-made’ billionaire, there had been controversy about her being self-made as well as her net worth. In March 2019, she appeared on the Forbes Billionaires list after claims that Kylie sold 51% of Kylie Cosmetics to Coty, Inc. in January 2019. It was later revealed through official documents that the Kylie Cosmetics deal with Coty, Inc. was much smaller than what had been claimed.

Kylie Jenner’s Net Worth Clocks In At $750 Million

After the Forbes Billionaires list controversy, Kylie now stands worth $750 million, still making her the youngest richest person in 2022. As far as her net worth compared to other Kardashian sisters is concerned, she stands 2nd to her older sister Kim Kardashian who holds a net worth of $1.8 billion just above Kylie.

The claims of Kylie being self-made had also been a point of controversy. Kylie’s status as a “self-made” billionaire sparked controversy on social media. Many accused she is benefitting from her family’s wealth. Responding to the criticism, Kylie said, “If they’re just talking about finances, technically, yes, I don’t have any inherited money.” But the question still remains the same; would any other teenager not born as wealthy and as privileged as Kylie have gotten the same success from such a venture.

Kylie regarded social media as the main force behind the overnight success of her cosmetic brand. She said, “It’s the power of social media. I had such a strong reach before I was able to start anything.”

Let’s have a glimpse at Kylie Jenner’s life facts:

See Also:  Who is Annabel Scholey? All About English Actress

She Completed Her Formal Education At A Home School Program 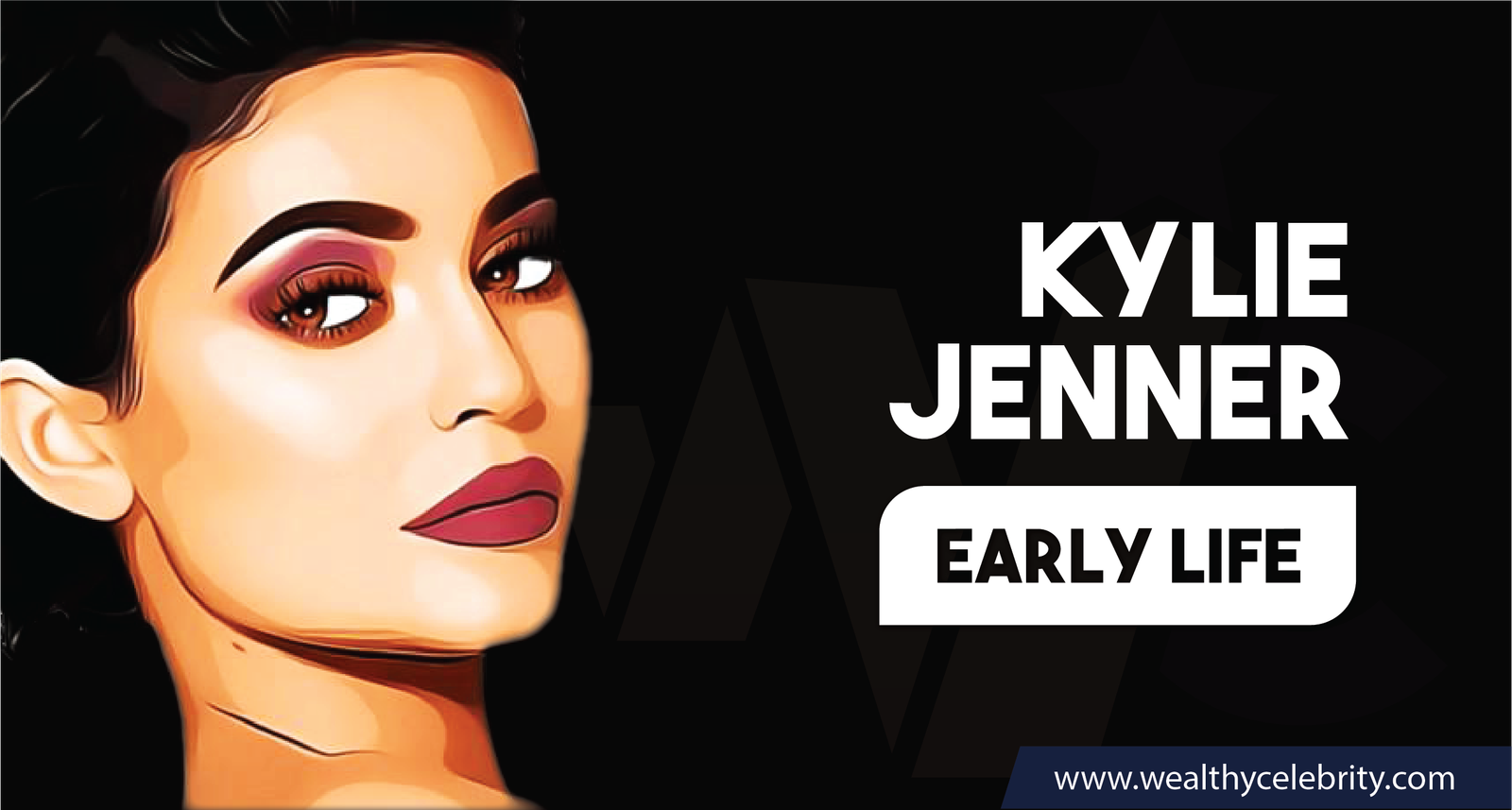 Kylie Kristen Jenner was born on August 10, 1997, in Los Angeles, California. She is the youngest daughter of Bruce Jenner (now Caitlyn Jenner) and Kris Jenner. Kylie Jenner’s father Bruce Jenner is famed for winning the 1976 Summer Olympics decathlon while her mother Kris Jenner is a media personality mainly famed for featuring in the reality TV show Keeping Up With Kardashians. Kendall Jenner is Kylie’s older sister.

Kylie went to Sierra Canyon School. She was on the cheerleading team in school and claims that she also performed in plays in school. She earned her high school diploma in July 2015 from Laurel Springs School after getting enrolled in an at-home education program.

She Started Her “Professional” Career At The Age Of Ten 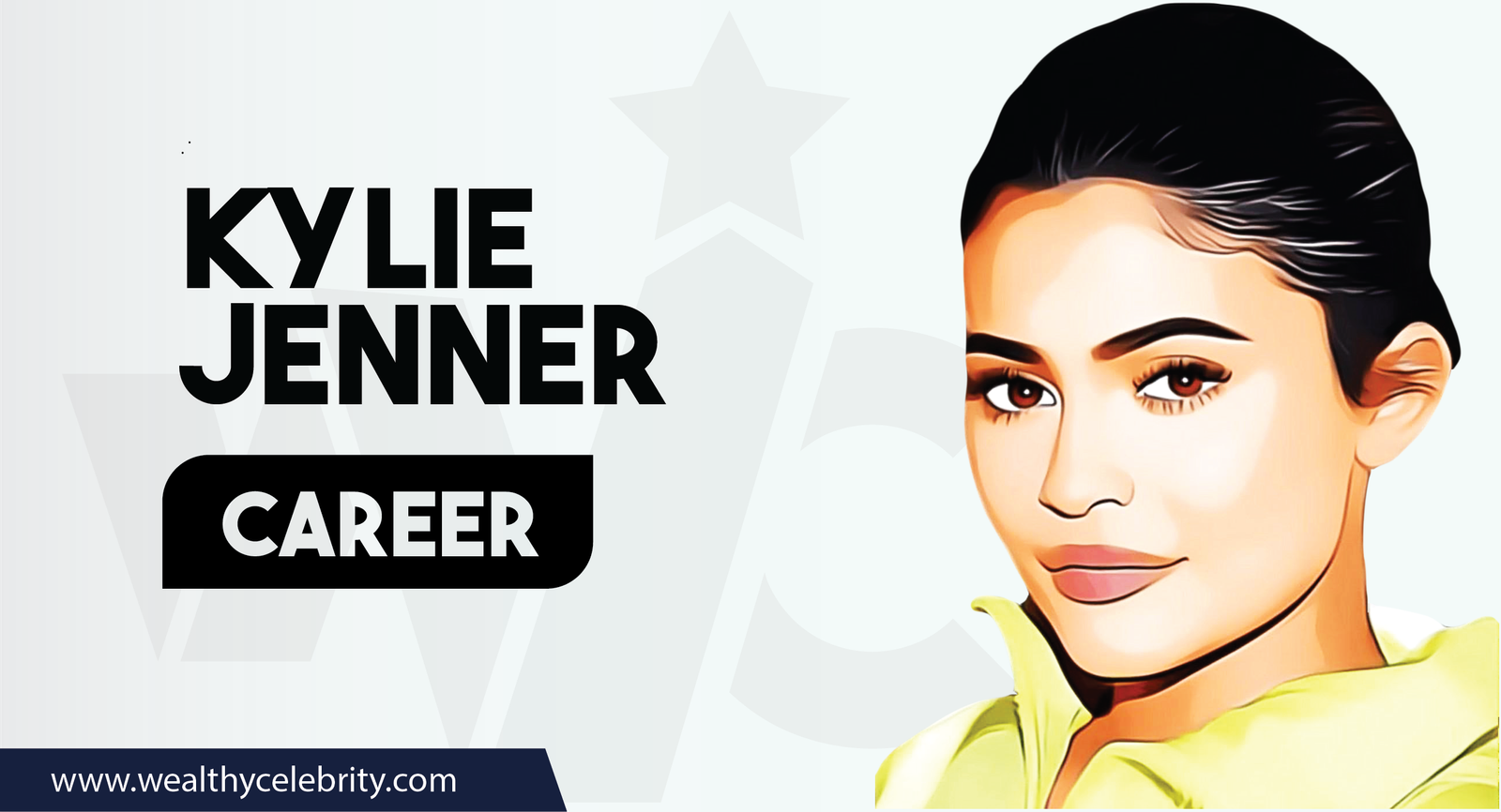 She was just 10 years old when she first appeared in the reality TV show Keeping Up With the Kardashian in 2007 along with her parents and siblings. The reality TV series that airs on E! cable network is the longest-running reality series to date. The series mainly features the personal and professional ventures of the Kardashian family.

Kylie stepped into modeling with the Sears clothing line Crush Your Style. She was also featured in photoshoots of OK! Magazine and Teen Vogue. She debuted her ramp walk at the age of 15 at New York’s Fashion Week. She dressed up in a black ballerina-style outfit by Abbey Dawn for her first catwalk.

Kylie Jenner, following her elder sister Kendall Jenner’s footsteps, did modeling gigs for White Sands. She was also got featured in People magazine along with Kendall Jenner in 2010. Kylie’s other ventures along with her sister Kendall include hosting red-carpet events for Glee: The 3D Concert Movie and The Twilight Saga: Breaking Dawn – Part 1, interviewing Bing Box at The Hunger Games premiere in 2012, co-hosting the 2014 Much Music Video Awards and publishing their own sci-fi novel, Rebels: City of Indra. The novel is about two girls having superpowers. Kylie Jenner and Kendall Jenner earned $100,000 each from the endorsement of Nicole’s nail polishes by OPI.

Kylie tossed a handbags brand for Steve Madden in 2014, became the beauty ambassador of the skincare line Nip + Fab in 2015, and launched a clothing line Kendall + Kylie with British fashion retailer Topshop the same year partnered with her elder sister. Kylie became the new face of PUMA in 2016 and launched a line of sunglasses with Quay Australia in 2017.

She announced the launch of her self-made lipstick line, Kylie Lip Kit in August 2015 which turned out to be an instant hit, thanks to her Instagram following. Jenner also launched a new personalized website and mobile app to feature her makeup products just 2 months after the launch of Kylie Lip Kit. She later went on to rename Kylie Lip Kit into Kylie Cosmetics, which brought her massive personal fortune and made her almost a billionaire.

Kylie is also starring in the KUWTK spin-off reality show Life of Kylie, which first premiered in August 2017.

She teamed up with her sister Kim Kardashian in 2019 to launch a new fragrance line, Jenner’s first venture into perfumes. 2019 was the year when Kylie introduced her own skincare brand Kylie Skin in the month of May. Kylie’s skincare brand has been producing derma products, including face washes, scrubs, moisturizers, and makeup-removing wipes. 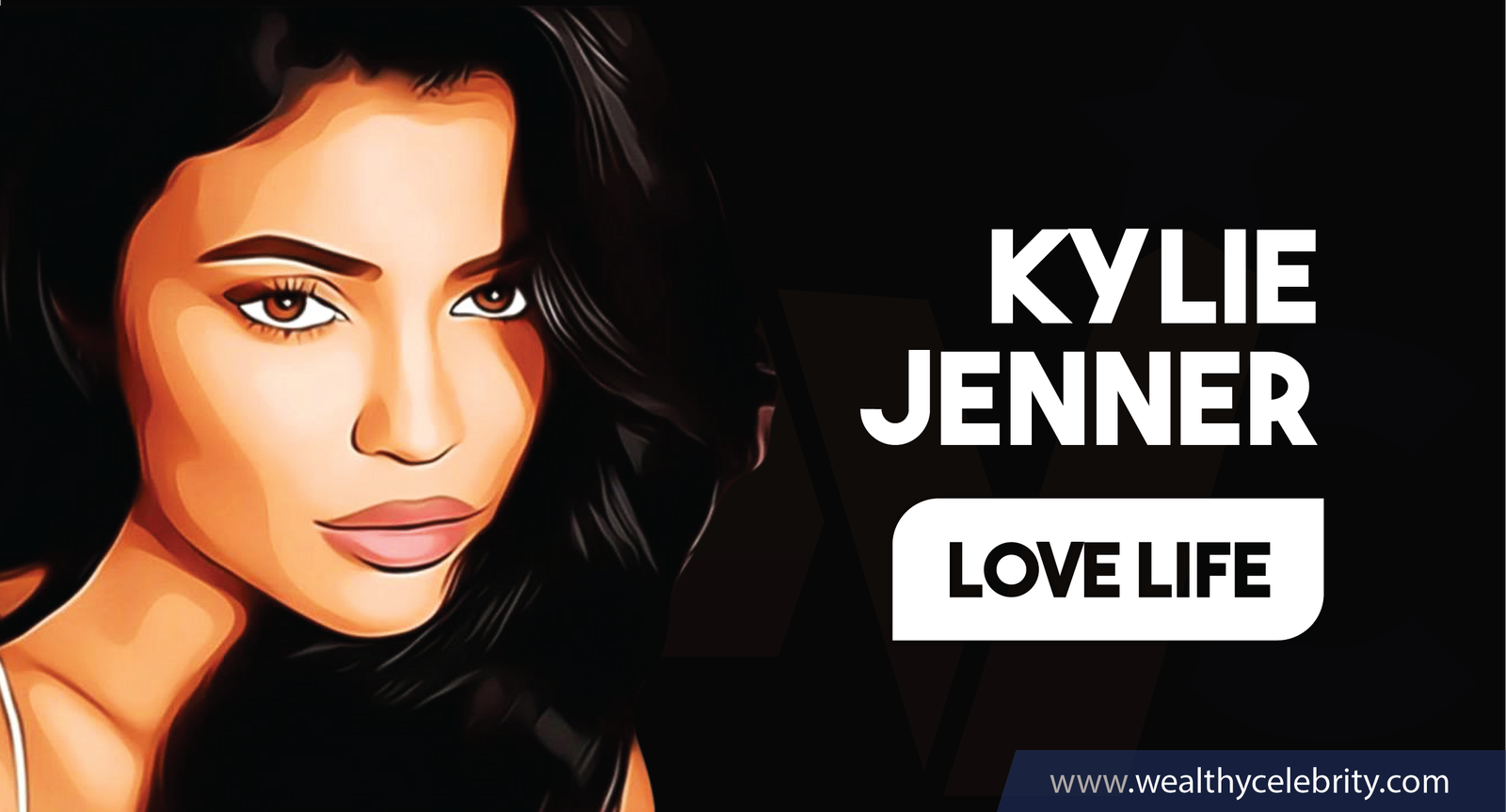 Despite growing up amidst the media limelight and social media fame, Kylie has kept her love life mostly private. The youngest Kardashian sister has been in numerous flings since her teenage but only two serious relationships. Kylie dated rapper Tyga (Micheal Ray Stevenson) from 2014 to 2017. Kylie also starred in Tyga’s music video for his song “Dope’d Up” in October 2015. It was Kylie’s first serious relationship.

Her three-year relationship with Tyga was pretty messy. Kylie had a public feud with Tyga’s fiancé and the mother of his child Blac Chyna. The couple also faced multiple rumors about pregnancy, and had public breakups, but went on to date for 3 years; on and off.

The couple made their relationship official in 2014 by sharing a picture of a couple of Halloween costumes on Instagram. She also flaunted a massive promise ring in September 2016, implying that the duo planned to get married, which unfortunately never happened.

Travis Scott was Kylie’s second serious relationship. Jenner dated Scott from 2017 to 2019 and also has a daughter, Stormy with him. The two broke up after Kylie sensed that Travis was cheating on her, an accusation that Travis denies.

Later, on September 7, 2021, the couple reunited by updating their fans that they were expecting their second child. Well, after that, the information about their second baby’s identity was undisclosed to the media. But few rumors have stated that this time, the couple got blessed with a baby boy.

Kylie’s other filings include:

Who is Kylie’s current boyfriend?

The answer is Fai Khadra. Back in 2019, there had been buzz that model Fai Khadra and Kendall Jenner were dating. Kendall had once joked about “starting a family” with Khadra.

But recently, the model Fai Khadra has been making meaningful appearances on Kylie’s Instagram and everyone is convinced that they are dating. 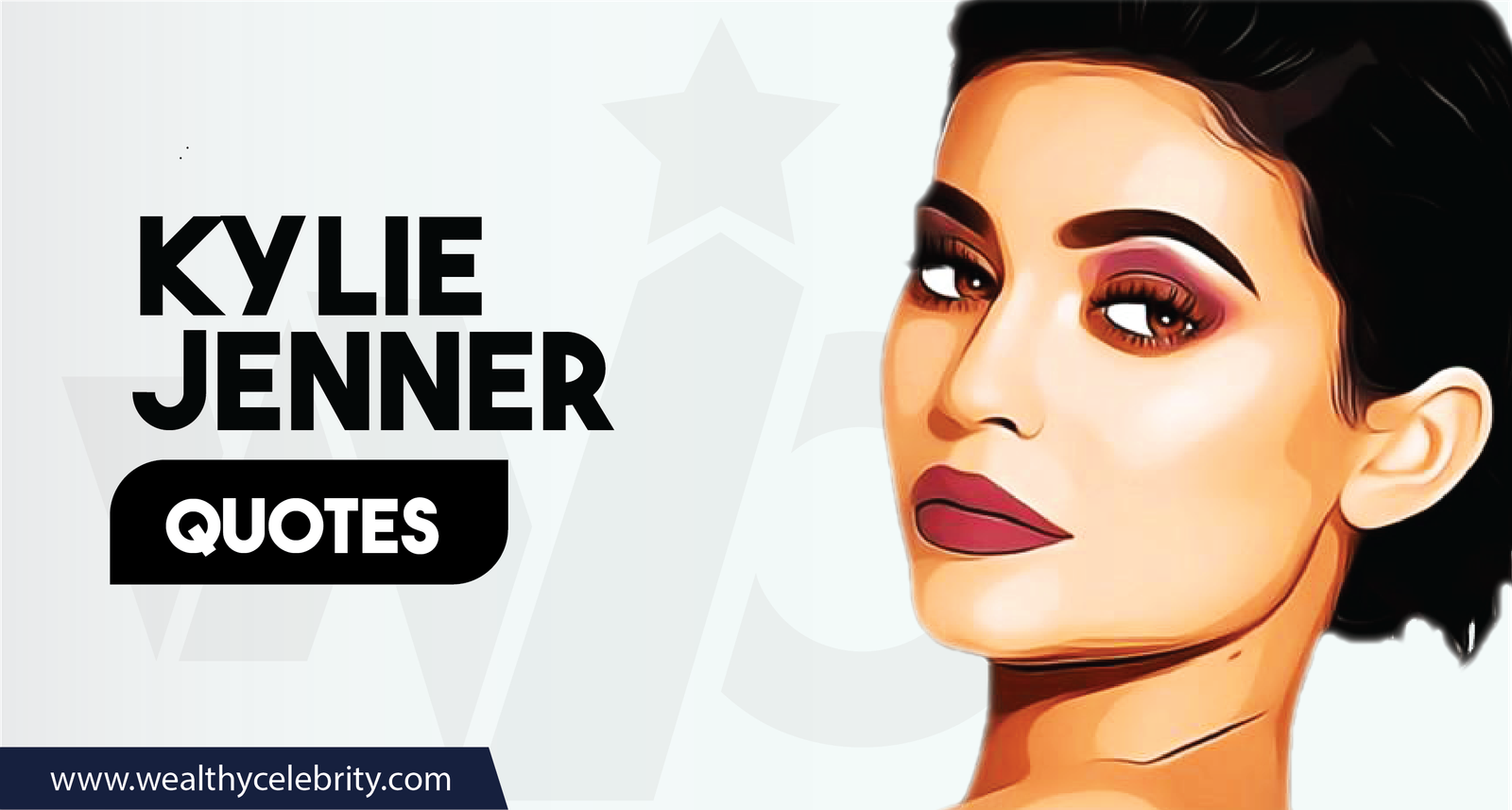 Her Popularity on Google

Q: How old is Kylie Jenner?

Q: What is the birthplace of Kylie Jenner?

Q: Who are Kylie Jenner’s parents?

A: Kylie Jenner is the daughter of the famous TV personality Kris Jenner and Bruce Jenner.

Q: What is Kylie Jenner’s height?

A: Kylie Jenner is 5 feet and 6 inches tall.

A: No, Kylie Jenner has been rumoured to be with many guys, which suggests she is straight.

Q: What is Kylie Jenner’s net worth?

A: Kylie is considered the youngest billionaire globally, with a net worth of $750 million.

Being born into a star-studded family, Kylie Jenner was born with a golden spoon in her mouth. Opportunities kept knocking at her doorstep and rather than relying on her family’s wealth, she rather availed all the opportunities and became the youngest and wealthiest person. Even if she is not a billionaire but having a net worth of $750 million at such a young age is a milestone in itself.

What are your thoughts on Kylie Jenner’s net worth and relationship with Travis Scott? Let us know in the comments.

Why These Celebrities ‘Embarrassed’ Themselves Using Photoshop? - The Top 54 Celebrity Photoshop Fails You Need To See – Wealthy Celebrity

[…] is a goddess mirror selfie of Kylie Jenner which was labeled “Photoshopped” by fans for the curvy wall. She used her Snapchat […]

Travis Scott's Height Qualify Him as a "Shortie"? Let’s Compare His Height With Other Celebs To Get a Better Idea – Wealthy Celebrity

[…] caught the media spotlight after he got spotted at almost the same height as his girlfriend, Kylie Jenner, who stands at a normal height of 5 feet 6 […]

[…] Johnston is a Canadian actor and television personality. He is best known for his role as Stewart on the comedy series – Letterkenny and Danny Lubbe […]

How can someone be billionaire and be listed in Forbes at just an age of 23? She's pure inspiration and I really want to be as lucky and as talented like her.