Christian Nodal tattoos are popular because they’re not just incredibly captivating but also meaningful. Since the beginning of his music career, the singer has been a big fan of ink art, for which he covered his whole body, including his face and chest, with tattoos. At first, people took his tattoos to be extra controversial, as almost everything he did or accomplished was on his body the next day. But later, as time passed by, his tattoos became his real source of fame.

He once tattooed his former girlfriend – Belinda’s eyes and name on his body, which he later covered with other symbols after their breakup. And recently, when the rapper showed up with a no-tattooed face on his Instagram story, people wanted to know what really happened.

So now, we guess it’s time to find out whether his no-tattooed face was a quick prank on his fans or reality and everything about his all-body tattoos. Take a look below. 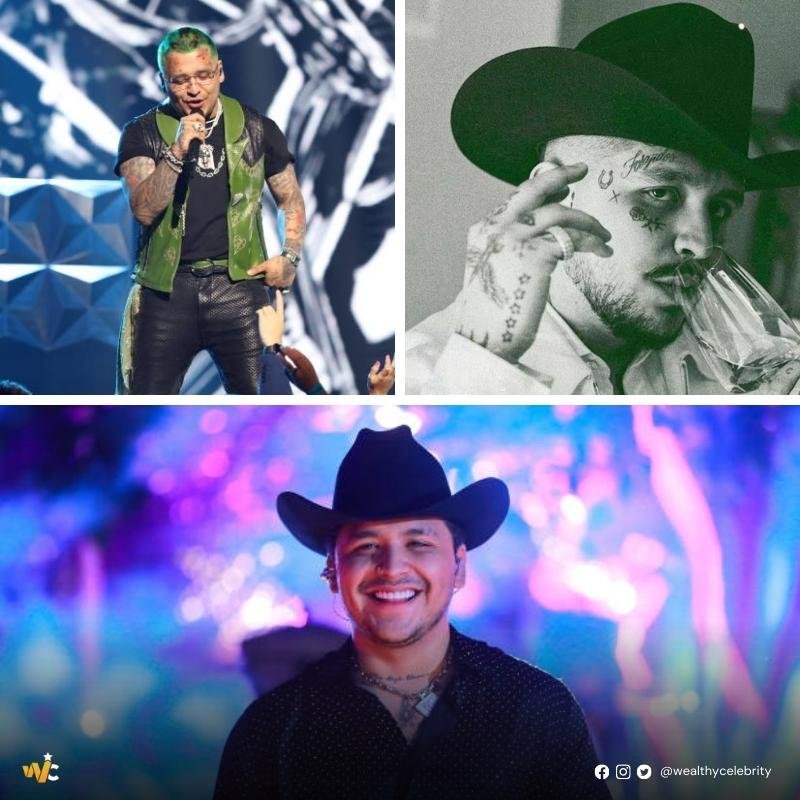 Christian Nodal Tattoos Vanished – Why He Showed Up With A No-Tattooed Face?

Christian is a German singer and rapper who recently grabbed the media attention for the first time in his career for covering up all his facial tattoos, which were related to his former girlfriend – Belinda Peregrín. Many people believe that there were many other tattoos with different meanings on his face, and he removed them to get rid of them. But if we look on the other side, his fandom states that there is a filter or makeup which helped him cover his face for a new project (probably).

Moving on, his makeup artist released a video of Christian recently, where he has no tattoos on his face. And as the singer was with his makeup artist, it’s possible that his tattoos aren’t gone anywhere; he is just covering them up for some of his future projects.

Another proof that the rapper hasn’t removed his tattoos is his Instagram story that he posted a week after sharing his clean-faced video. In that story, we can see Christian Nodal tattoos are present on his face as they were. – Source

As per Christian Nodal’s interviews, his facial tattoos hold separate meanings but all are intended to make Nodal feel encouraged and idolized. When he started dating Belinda, he had her name tattooed on his tragus, but after their breakup, he covered them all with other types of ink art, which are the symbols of success and love. He also had tattoos related to his former girlfriend on his face, but as per his trending news of the removal of those tattoos, people believe that he took this step to show his ex how far gone he is now.

Below we will share some lesser-known facts about Nodal’s tattoos. Have a look:

He Currently Got Over 50 Tattoos On His Entire Body

Christian Nodal currently has 50+ tattoos all over his body. On his chest, he first tattooed Belinda’s eyes, but after their breakup, he decided to cover the space with other tattoos. On his face, the first tattoo was about a bag of money, and all others were made after taking inspiration from different things, including roses, horseshoes, and more. Moreover, the singer has ink art all over his hands and arms, which makes him one of the best tattoo singers and rappers in Germany. 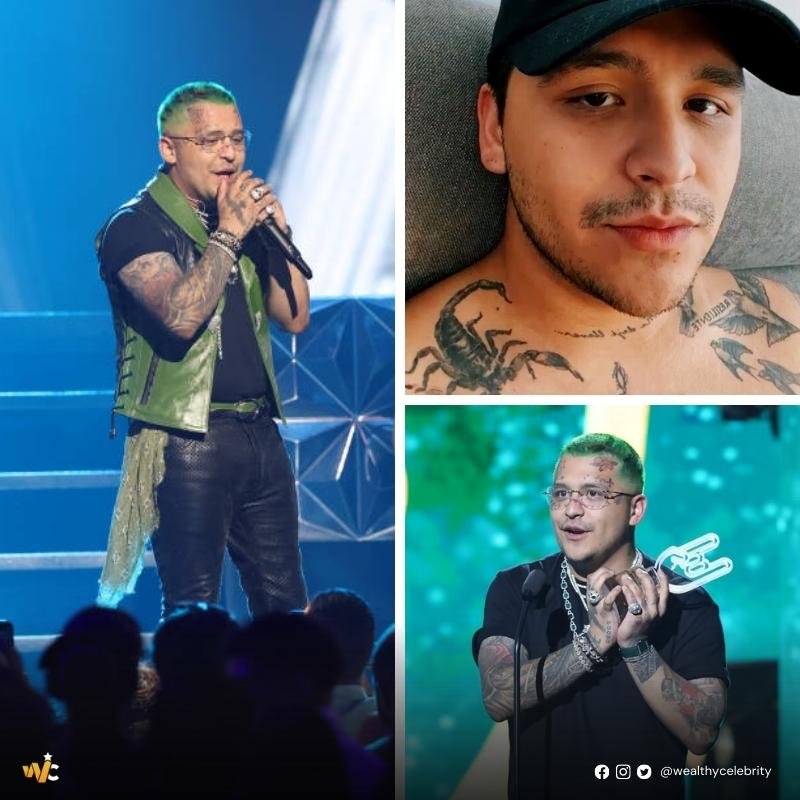 Fans Recently Spotted Him With A Pink Banner On His Nose

Before Christian revealed his no-tattoo face look on his Instagram, his fans spotted him with a pink banner tattoo around his nose. This tattoo was a set of six red Deezer triangles that streaked across the tip of his nose. The tattoo seemed like a party-pop-themed art, which meant self-love and affection. Here’s a point to be added – most of his face tattoos are inspired by an indigenous group generally known as Comcaac from the Mexican state of Sonora. Nodal especially met with the indigenous expert tattoo artist – Mina Barnett, who crafted fleeting designs across his face just before one of Nodal’s singing concerts.

Pre-Hispanic Warrior Tattoo is quite popular among the world of men. By having this tattoo, the singer simply unrevealed how much he believes in the afterlife and the challenges he has to face before reaching his goals. Moreover, his love and respect for Mesoamerican culture are beautifully described on his neck side. 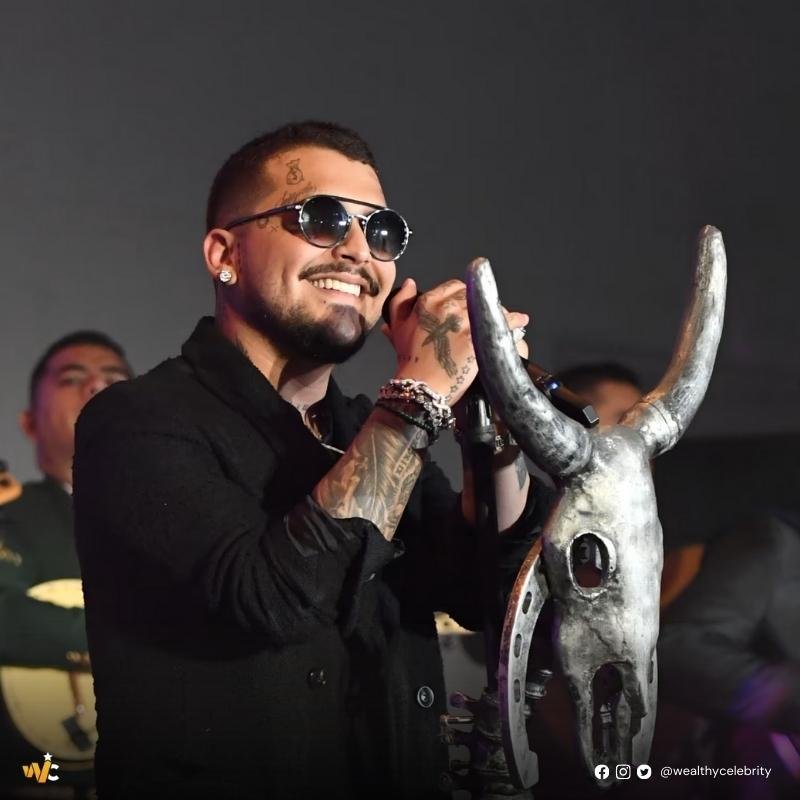 On the front side of Nodal’s ear, he got a tattoo that was a clear alphabetical streak of his ex-girlfriend’s nickname, “Beli” which mainly shows a sign of love for her. There is no official buzz about the timeline and intent of all the tattoos he got while in courtship with Belinda. But it might be fun to know that this singer also had Belinda’s eyes tattooed on his chest. Also, he got a love bow arrow, the number 4 and the term “utopia” (meaning heaven), and a red heart on his forehead.

He Claded Belinda’s eye tattoo with a wing ink design.

In an interview, Nodal stated that he doesn’t want his exes to think they are still pretty special to him, so he found a solution for that unwanted ink on his chest: cover it up with more tattoo designs.

He said: “I had some eyes here on my chest; I covered them with wings.” “I made a complete chest design…of delight.” Also, it got revealed that back in February 2022, Nodal swathed up his tattoo that featured the word “Beli” near his ear. The four small alphabetical streaks of letters were altered into the four suits in a deck of playing cards.

Nodal once revealed that his sleeve tattoo is a symbol of courage. The tattoo uplifts him to have no fear and to go after what he wants in life. The letter “V” on the design with wings coming out of each side. This design symbolizes freedom and liberty, which urges him not to be afraid of anything. 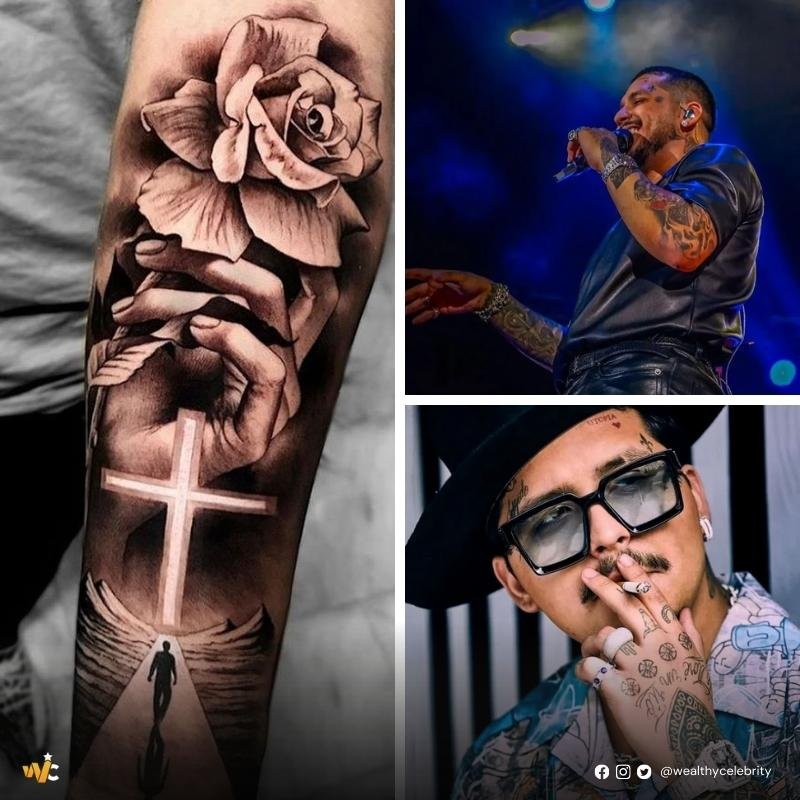 He Got a Compass Tattoo On His Chest

Nodal has a compass tattoo on his chest that means wisdom. He loves to travel, and he wanted a tattoo that would remind him of where he’s been and where he’s going.

“I used to be a huge fan of adventure, but now I’m more focused on making sure my future is stable,” said Christian. “That’s why I chose this tattoo—to remind me that even though I don’t have a compass, in the future, I will always have one.” – He Said. 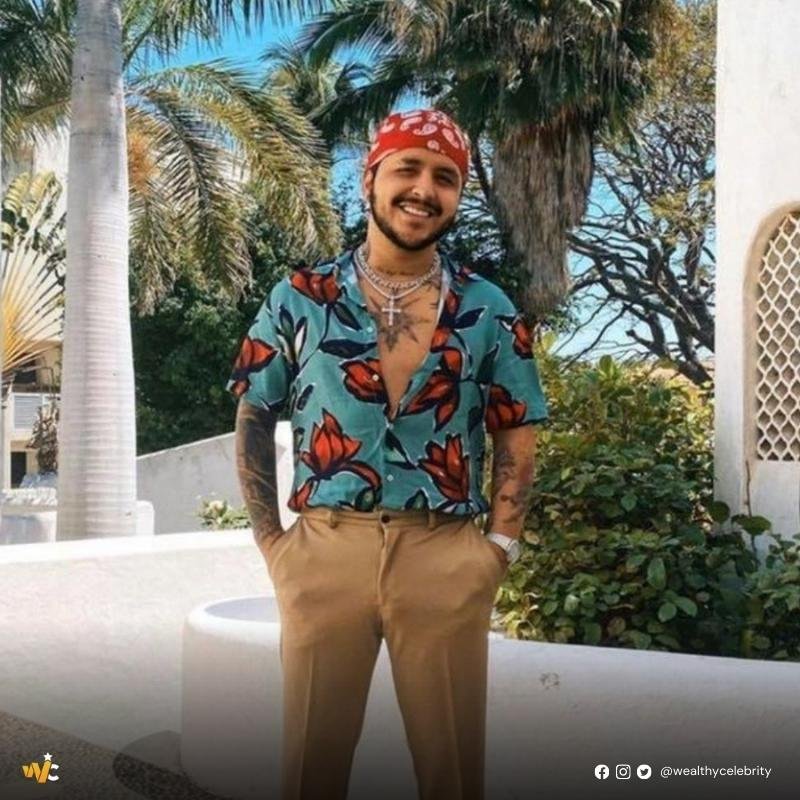 Christian Has a ‘Scorpion Tattoo’ That Symbolizes A Mystery

The Scorpion Tattoo on Nodal’s body is not only appealing but also figurative. This tattoo is located where his chest starts. When he was first getting the tattoo done, he said it took him about 30 minutes to get it done. He said that once it was finished, his friend had no idea what it was supposed to represent! He further said: “I also had no idea what it meant. But it was just something about the way it looked.”

Well, according to the Scorpion Tattoo’s insights and meanings, such tattoos usually symbolizes male sexuality. Some artists also state that it is a symbol of power and control. So, in general, Nodal’s scorpion tattoos might mean self-loyalty and encouragement. 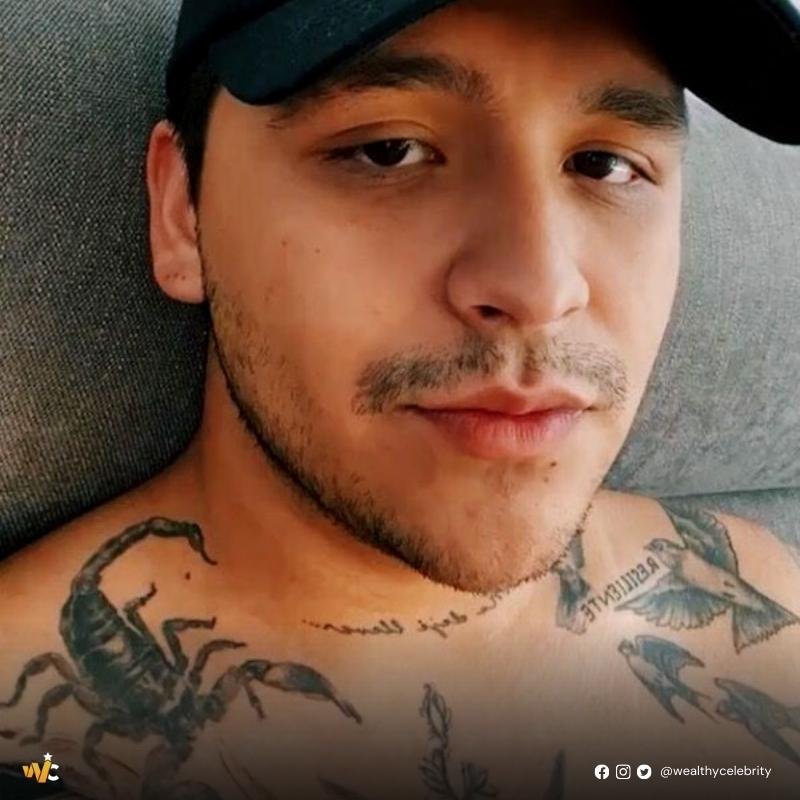 He Holds an “I Got Carried Away” Tattoo on the throat that Monumentalizes his album “Me Deje Llevar.”

“Me Deje Llevar” is Christian Nodal’s album which translates as “I Got Carried Away,” which has also been nominated for the Latin Grammy in the category of Best Tango Album.

The singer has taken the tattoo on his throat to remind him to stay humble about his career. In an interview with La Capital, he said that he is inspired by artists like Shakira, who have a sense of humility in their music and style. He says this tattoo is a reminder that “it is possible for me to be carried away by my passion for music.”

Christian Nodal told the media that his tattoos are all about his life and the meaning behind them. He has been working on his tattoos for about two years, but he just didn’t feel like he had it completed. Well! No doubt that Nodal’s tattoos made him famous in the music industry but not as famous as he is right now for the absence of his facial tattoos. Well! We hope this post was informative and helpful for you all. 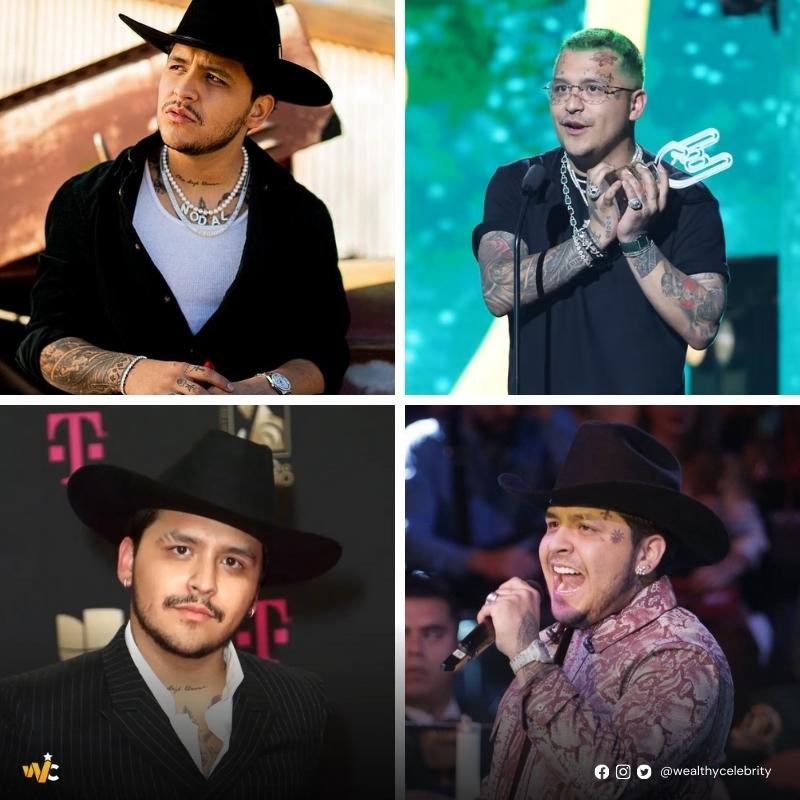 What are your thoughts on Christian Nodal tattoos? Let us know in the comments.