Michael Phelps, or Michael Fred Phelps II, has an estimated net worth of $100 Million. He is an American most-trained swimmer who has 28 medals in Olympic history, including 23 gold medals. With his remarkable swaying performances in water, he shocked the world and dragged his competitors left behind. He introduced many distinct styles in swimming and made several world records. At the Games in Beijing 2008, Phelps made Olympic history by being the first athlete to receive eight gold medals in a single Olympic.

In 2016, he married an American Model and Miss California 2010, “Nicole Johnson”. If you want to know Michael Phelps’s net worth, family, and more about him, check out the below-written article. 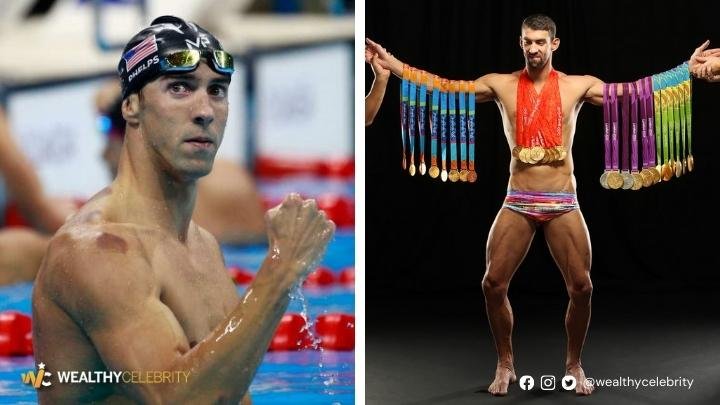 Pictures of Michael Phelps with his Medals

A Check At Michael Phelps Biography:

Before his Swimming Career, Michael lived a bumpy Childhood:

Michael Phelps, ”The Flying Fish,” was born on July 3, 1985, in Baltimore, Maryland, United States. He was the youngest child of Michael Fred Phelps and Deborah Sue Phelps. He got his sports spirit from his father, a state trooper, and his mother, a middle-school principal, who always encouraged him to chase his dreams.

He started swimming when he was only seven years old with his older sisters Whitney and Hilary, with whom he joined a local swimming club. At first, he got pretty scared of water, but later, he got used to it and learned all the techniques and tricks. When he was nine, he got diagnosed with ADHD. Despite his behavioural abnormality, he never stood back and made a national record in the 100m butterfly event at the age of 10 only. 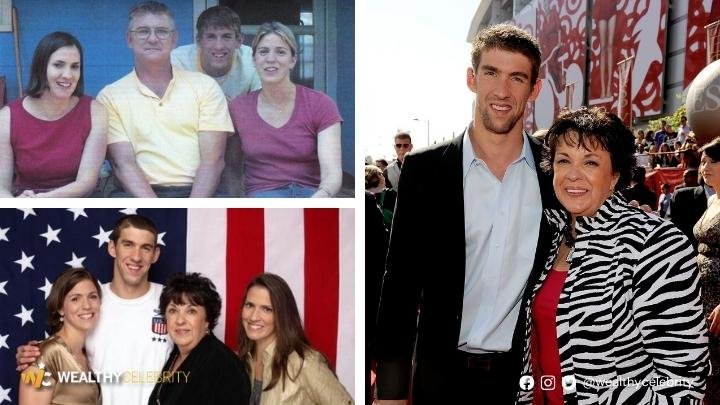 He begins his swimming Career under the supervision of Top Swim Coach “Bob Bowman”:

After making a national record, his parents recognized his hidden talent and took him to Bob Bowman, an unarguably the best swimming coach of his time. Bowman agreed to teach him after seeing his distinct style of swimming. Additionally, he predicted that by the age of 15, Phelps would have Olympic Caliber material and might participate in the 2000 Summer Games in Australia. After knowing this, Phelps decided to quit all other sports and gave all his time to learning swimming techniques.

See Also:  Who is Prichard Colon? All About American Boxer

In 2001, he made the world record in the 200-meter butterfly. Phelps became the youngest male swimmer who set a world swimming record at 15 years old. In the same year, he entered the World Championship and smashed his record, clocking 1:54:58s and getting his first international medal.

Since then, he started winning all the competitions in which he participated. Bowman supported him all the way around. At 17, he set 5 world records that showed his bright future in the swimming sphere.

He later enrolled at the University of Michigan to study Sports marketing and management:

Bowman was hired to train Wolverine’s swim team at the University of Michigan, so Phelps also followed him there and started his sports management and marketing studies. At the university, he continued his practices and set world records, i.e., Pan Pacific Championship in Victoria 2006, World Championship in Melbourne, etc. With his remarkable performances in the 400-meter individual medley and 200-meter individual medley 100 butterfly, he continued to conquer several world records and continue to break his records. He took temporary retirement in 2012 for two years and resumed his career in 2014 again with the same spirit and enthusiasm.

A Quick Check Into Michael Phelps medals and records:

Michael has set 39 world records during his swimming career. He received 28 medals at the Olympic Summer Games in London, Athens, Beijing, and Rio. Of these, 23 are gold, three are silver, and two are bronze, which makes him the first Olympic athlete to win this number of medals.
At the 2009 World Championships, he swam at a swift 5.5 miles per hour to smash the record in the 100-meter butterfly. As per ESPN, Phelps’ top swimming speed is 6 miles per hour which is unbelievable. 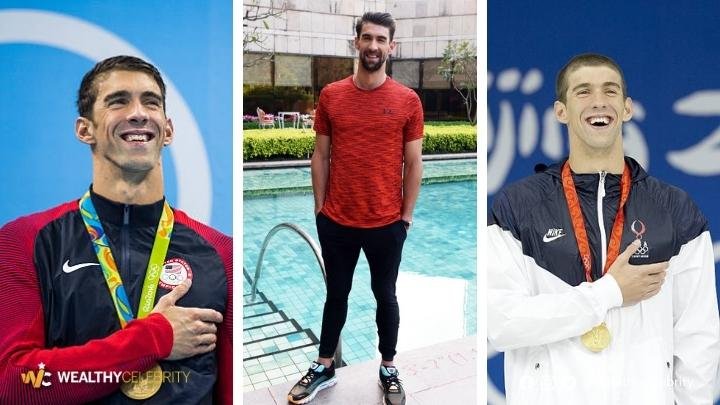 In 2011, Phelps and Nicole Johnson started dating each other. After seeing each other for six years, the couple decided to tie the knot in a private ceremony on June 13, 2016, in Paradise Valley, Arizona. Michael Phelps’ wife is an American model and Miss California USA 2010. They have three sons: Boomer Roberts, Beckett Richard, and Maverick Nicolas.

How Rich Is Michael Phelps?

Phelps, the best swimmer of all time, is among the highest-paid Olympic athletes. His accumulated net worth in 2022 is $100 million. Being the best swimmer in world history, he has no shortage of sponsorship from renowned brands. He has signed sponsorship contracts with Visa, Under Armour, Beats, Kellogg’s, Radio Shack, PowerBar, Speedo, Omega, Call of Duty, Colgate, etc. Along with these, he has endorsed brands like KRAVE Jerky, LV, and Wheaties. 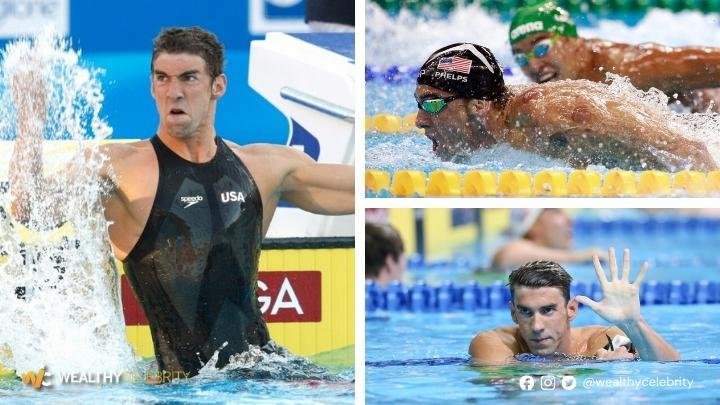 Pictures of Michael Phelps swimming for “US Swimming” 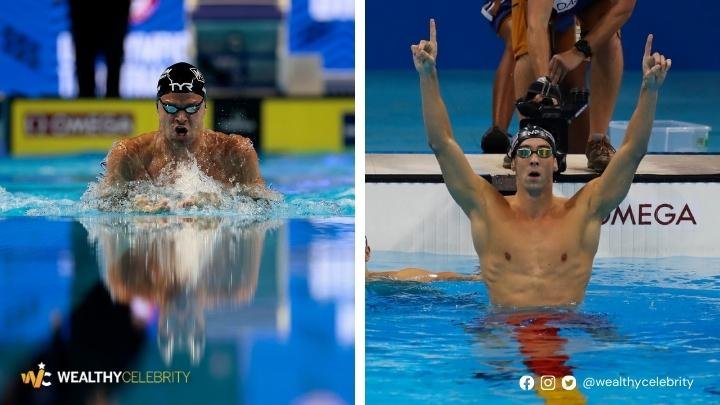 A: Yes, Michael Phelps is retired.

Q: What does Michael Phelps do now?

A: Michael Phelps revealed that he faced ADHD and depression problems and now works as a mental health advocate.

A: The Michael Phelps diet is not healthy at all. Due to his muscle-intensive physique, he consumes more food than an average man.

A: Michael Phelps competed in his first Olympics at the young age of 15.

Q: Who are Michael Phelps kids?

A: Michael Phelps has three kids, and their names are Boomer Robert Phelps, Beckett Richard Phelps, and Maverick Nicolas Phelps.

Q: Who is Michael Phelps' wife?

Q: What is Michael Phelps diet?

A: Michael Phelps likes taking egg sandwiches, with cheese, tomatoes, lettuce, fried onions and mayonnaise for his breakfast. For lunch, he eats pasta. And for dinner, Michael eats pasta with carbonara sauce.

Conclusions
Phelps has distinguished himself in the swimming world in a relatively short span of time, which is difficult for others to do. Even after retiring, he remains connected to his sport, inspiring the next generation of athletes to swim for success as an inspiration to follow. 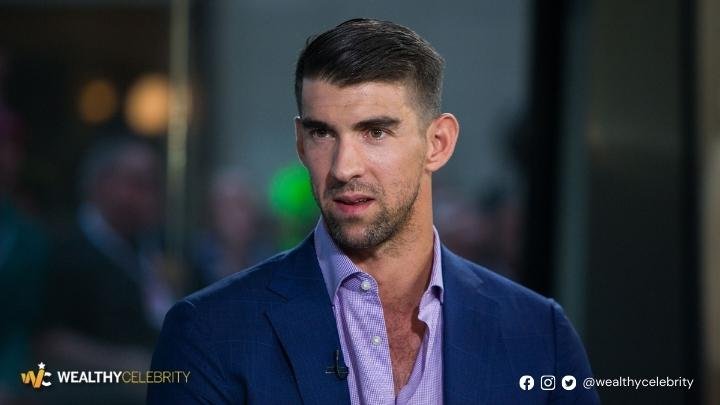 What are your thoughts on Michael Phelps’s net worth? Share with us in the comment box below!