A closely knitted family is the most significant institution of society. People choose different ways to form and grow their families. After marriage, there is a great responsibility on a couple as to how they want to grow their family; whether they want to enjoy their life alone or they want to bear and raise their children together to fully endorse the true essence of life.

With the advancement in scientific technology and the modern practices being made in the field of medicine, there is hope even for those couples who want to have biological children but somehow cannot have them because of their medical conditions. Such couples can utilize the modern miracle of in vitro fertilization or surrogacy.

Some couples who are blessed with wealth and the will to raise children, who do not come from their bloodline, choose to grow their family via adoption. They use the emotional and legal process of adopting children who are not raised by their biological parents. All of these are beautiful ways to grow a family and continue a well-raised human race.

If we talk about our favorite celebrities, we keep hearing the warm stories of famous couples adopting and raising beautiful children. No day passes by when we don’t see a warming post on social media about Angelina Jolie and her adopted daughter Zahara Jolie-Pitt. There are a few celebrities who are synonymous with adoption like Angelina Jolie and Madonna while there are many other celebrities whose adoption stories may come as a surprise to you. We are all in awe of these celebrities who choose to adopt children that don’t have the good fortune of being raised by their biological parents.

In this article, we celebrate the stories of the 20 most famous celebrities who made the conscious choice of adopting underprivileged children and giving them a life that they deserve. We all know what an expensive, time-taking, emotional, and nerve-wracking process adoption is. It is same for the celebrities. They don’t have it any easier. But in this article, we will explore how all the hardships of the process of adoption are totally worth it. 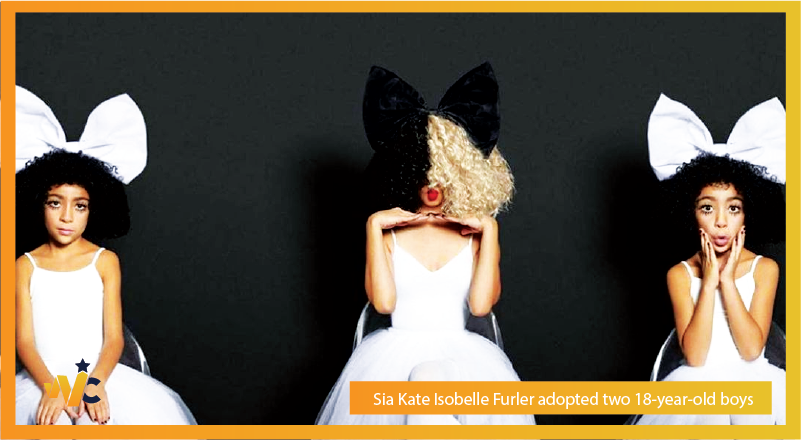 Sia, the Australian singer-songwriter famed for “Chandelier” adopted two 18-year-old boys just last year amid the coronavirus outbreak. She disclosed to the paparazzi that she adopted the boys as they were aging out of the foster care system. Sia’s adoption of the teenagers is specifically significant as she adopted them at a time of crisis when the entire world was put under lockdown. The singer’s move to give home to two young boys is really heart-warming. 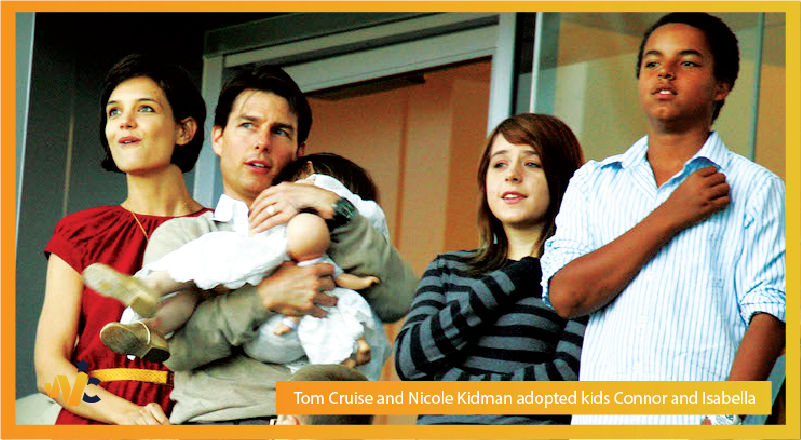 Tom Cruise and Nicole Kidman adopted two toddlers back in 2001 before their divorce. Connor and Isabella, now aged 25 and 27 respectively, chose to live with their father Tom Cruise. They didn’t live with Kidman over belief differences as they practice Scientology.

Tom Cruise and Nicole Kidman both have biological children as well but not together. Kidman is the mother of two beautiful daughters with husband Keith Urban. Sunday Rose Kidman Urban is 12 while Faith Margaret Kidman Urban is 9-year-old. Tom Cruise fathers a 14-year-old biological daughter with ex Katie Holmes. Her name is Suri.

See Also:  The Most Expensive Private Jets Owned by Celebrities 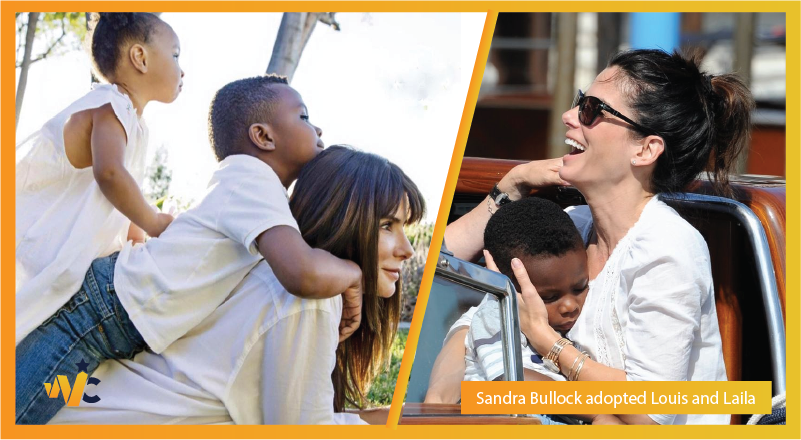 Sandra Bullock defines her family as “blended and diverse, nutty, and loving and understanding.” Sandra adopted a boy named Louis in 2010 while splitting from her husband Jesse James. She later adopted Laila in 2015, five years after Louis. “The Blind Side” actress has adopted both her kids from the Louisiana foster care system. She kept Laila’s adoption a secret to give the 8-year-old a normal life. 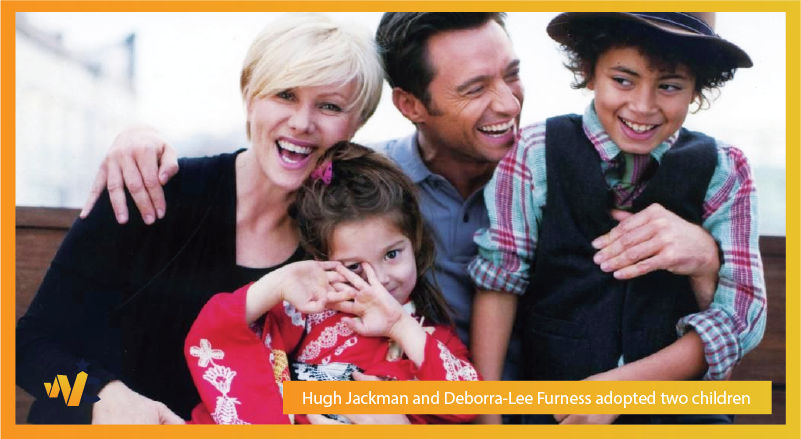 The couple adopted a son named Oscar, and a daughter named Ava to complete their beautiful little family. 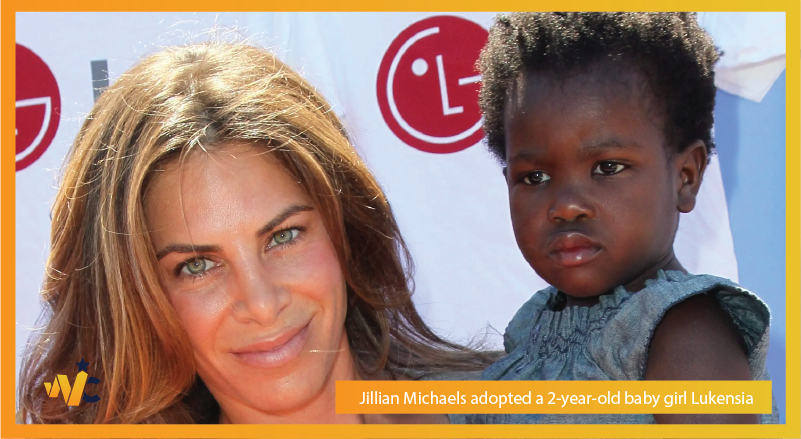 Jillian Michaels adopted a 2-year-old baby girl from Haiti in May 2012. Her then-fiancée Heidi Rhoades gave birth to their son the same month.

Jillian Michaels is now the mother of two; adopted daughter Lukensia 10, and son Phoenix, 8. The former Biggest Loser star Michaels split up with fiancée Rhoades after the birth of their son. The adoption process was pretty long for Michaels as she pursued adoption in 2010 and it was in 2012 that she was able to welcome Lukensia into her family. 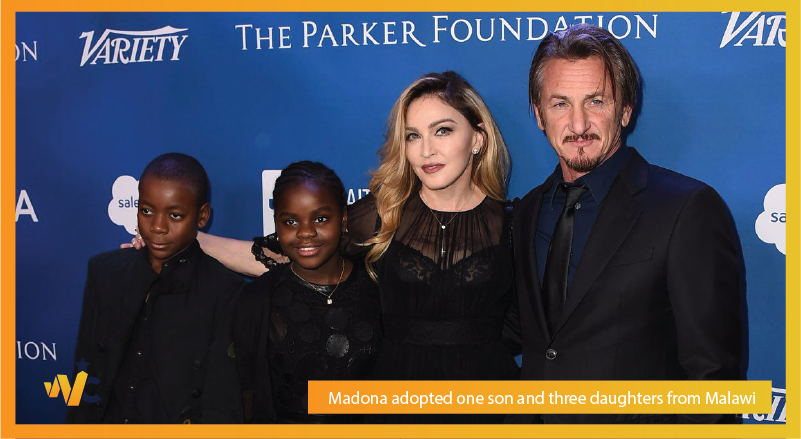 Madona adopted one son and three daughters from Malawi

Madonna is one of those celebrities who are well-synonymous with adoption. The American singer has adopted four kids; all of them were born in Malawi, Africa. She has adopted one son and three daughters. She brought home David in 2006, Mercy in 2009, and twin daughters Stella and Estere in 2017.

Madonna’s love for children and desire to provide them a home they deserve is the basic motive behind her adoption. 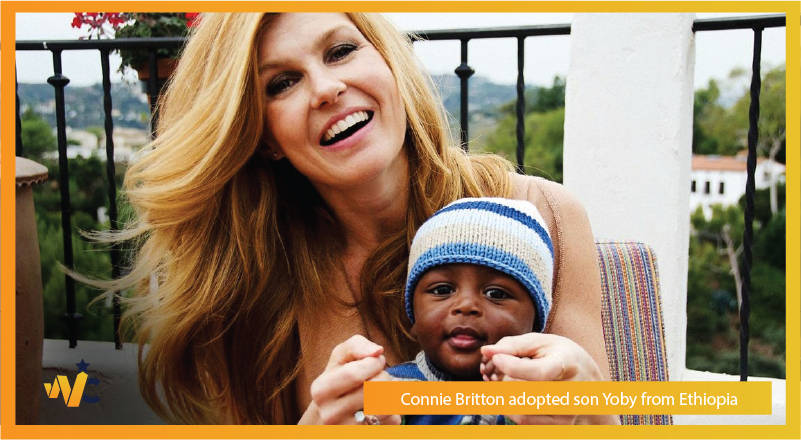 “Friday Night Lights” star Connie Britton has adopted a son Yoby from Ethiopia. She chose to adopt Yoby in 2011 after the death of her father. She adopted her son from Ethiopia while working with the African Children’s Choir. She shares a special bond with Yoby, now a 9-year-old. She has shared with fans that she can’t take credit as she is not Yoby’s biological mother, but her son naturally has a very curious mind and love for life. 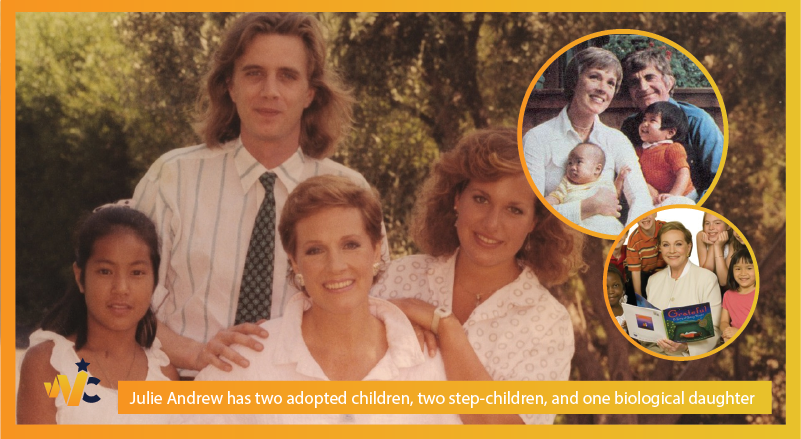 The English actress and author Julie Andrew has a perfectly blended clan; she mothers two adopted children, two step-children, and one biological daughter. Julie Andrews and her husband Blake Edwards adopted two Vietnamese orphans; 2-month-old Amy and 5-month-old Joanna in the 1970s. She had her biological daughter Emma with her former husband Tony Walton. Andrews and Blake didn’t have any biological children together. 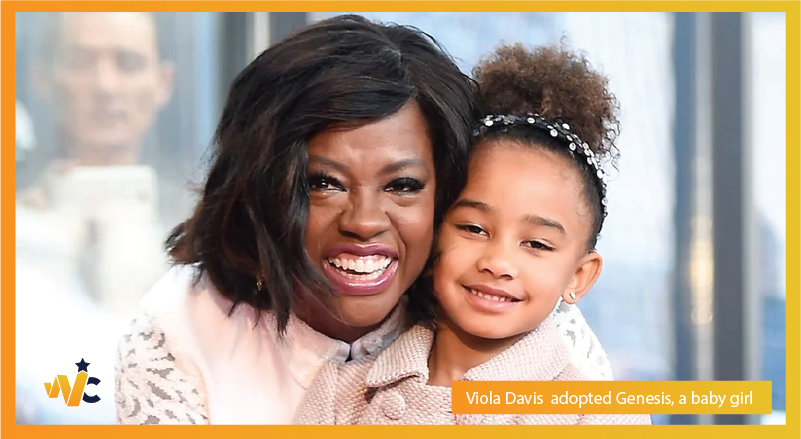 Viola Davis and her husband Julius Tennon adopted Genesis, a baby girl in 2011. Davis called her adoption of Genesis a birth from the heart and not the belly. The 9-year-old Genesis has featured in The Angry Birds Movie 2. 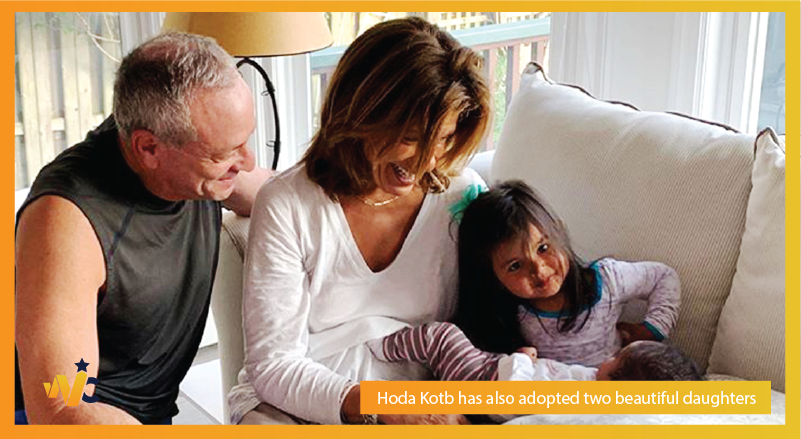 Hoda Kotb has also adopted two beautiful daughters; Haley Joy Kotb, Hope Catherine Kotb. The American broadcaster beat breast cancer in 2007 but the journey left her unable to biologically carry a baby. Once a fighter, always a fighter! She didn’t give up and adopted Haley Joy Kotb in 2017, 10 years after her recovery. She adopted Hope Catherine Kotb in 2019 to grow her family further.

Kotb termed adoption a beautiful and fulfilling experience as it granted her happiness she didn’t think she could have. 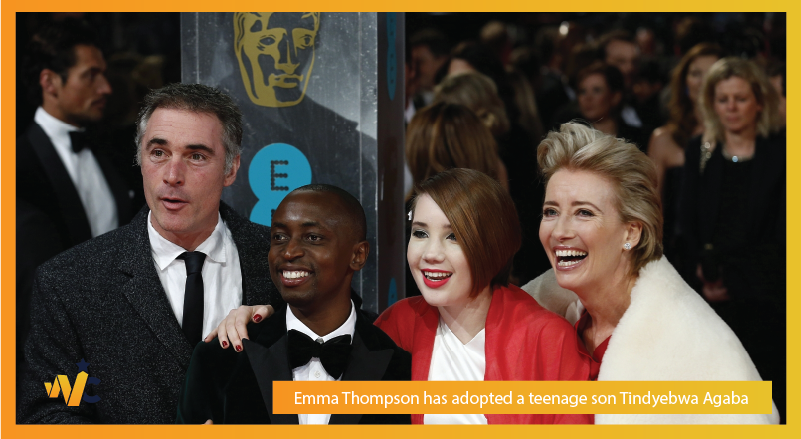 Emma Thompson has informally adopted a teenage son together with her husband Greg Wise. She met the 16-year-old Tindyebwa Agaba Wise at a Refugee Council event. She invited the homeless child who had escaped to London from his home country Rwanda to celebrate Christmas with them. Tindy became an integral part of Thompson’s family.

The British actress also mothers a biological daughter, Gaia. She struggled with IVF after the birth of her daughter. 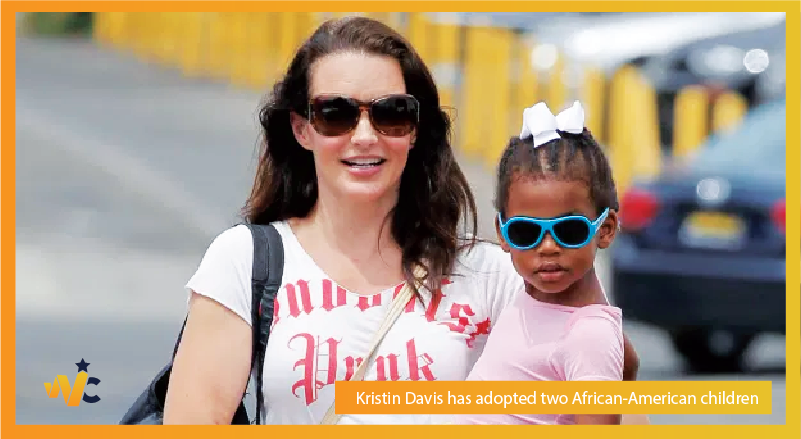 “Sex and the City” star Kristin Davis has adopted two African-American children. Davis adopted a daughter Gemma Rose Davis in 2011 and a son named Wilson Davis in 2018. She has termed the experience of adopting gratifying and blessed. 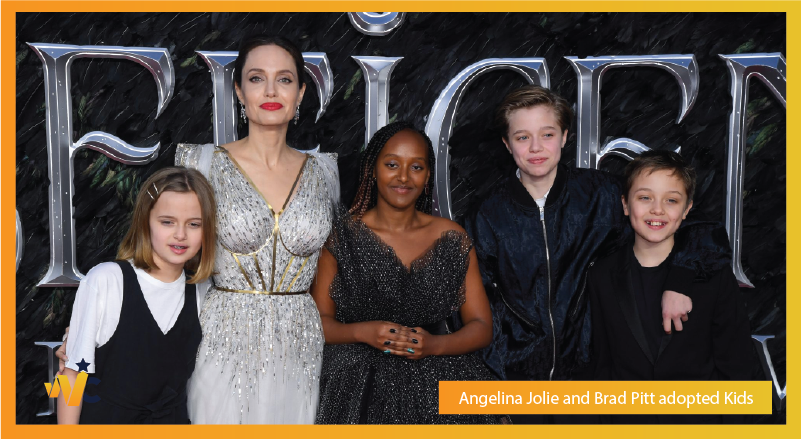 Jolie-Pitt duo has a large brood comprising of their three biological children Shiloh, Knox, and Vivienne, and three adopted children Maddox, Pax, and Zahara. Jolie-Pitt adopted the 19-year-old Maddox from Cambodia, 17-year-old Pax from Vietnam, and 15-year-old Zahara from Ethiopia.

The custody of the children has been the biggest bone of contention after the couple decided to split up. 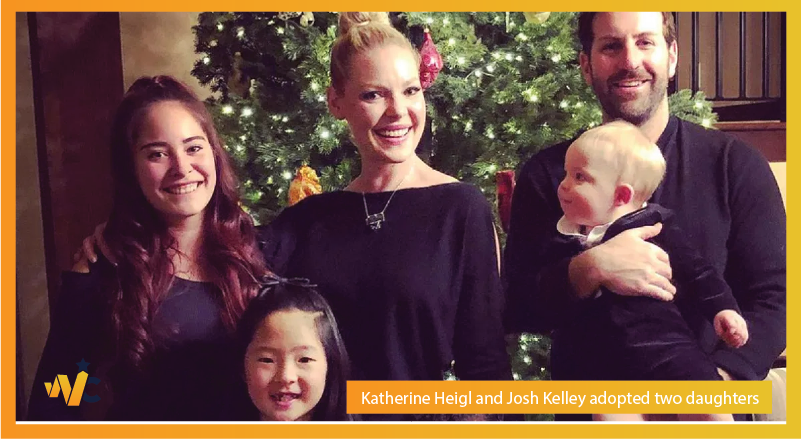 Katherine Heigl and her husband Josh Kelley have adopted two beautiful daughters together. The couple adopted a special needs baby, Naleigh in 2009 from South Korea. Naleigh suffered from a congenital heart defect that was treated with open-heart surgery.

In 2012, Heigl and Kelley adopted their second daughter Adelaide domestically. The couple has also been blessed with a biological son, Joshua who was born in 2016. 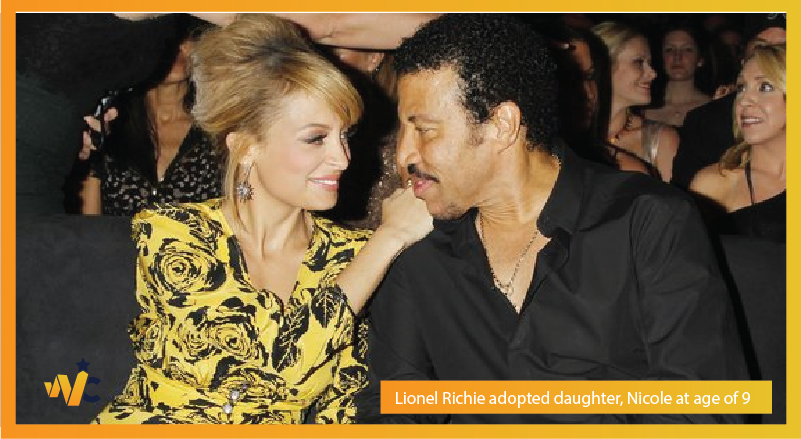 Lionel Richie looked after the daughter of his friend while they were struggling with personal and financial problems. She was only 4-year-old back then and soon became an integral part of his family. The American singer formally adopted Nicole at the age of 9. 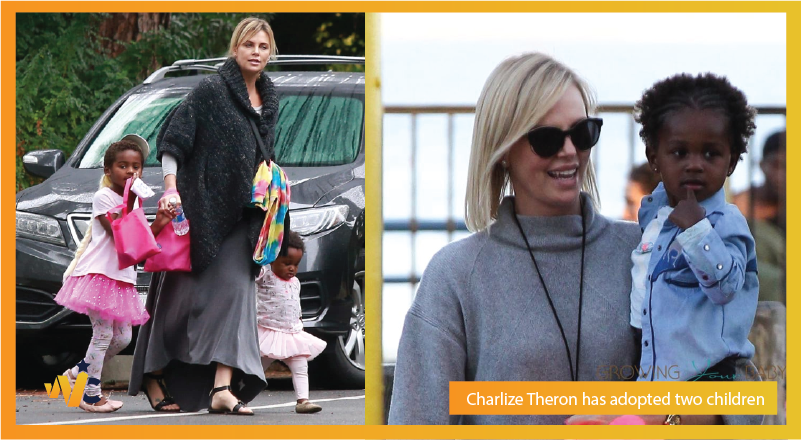 The American-African actress Charlize Theron has adopted two children. She adopted her son Jackson from her native country Africa in 2012, and her daughter August from America in 2015. 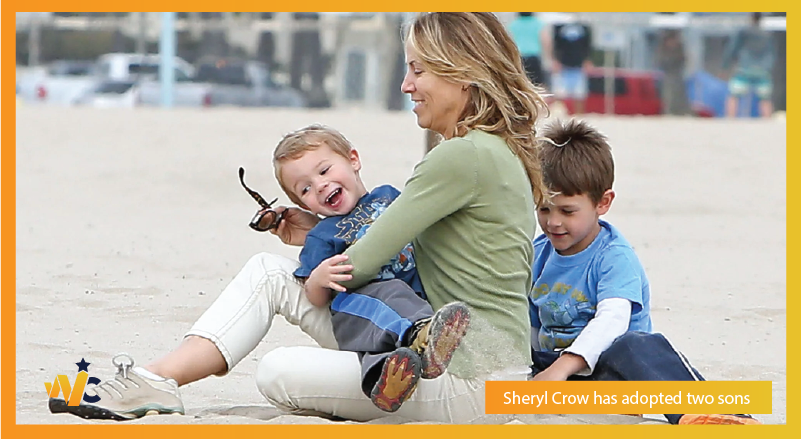 Sheryl Crow has adopted two sons; Wyatt and Levi. Crow adopted Wyatt in 2007 when he was just 2-week-old. He was named after Crow’s father. She even released her song “Lullaby for Wyatt” in 2009 for her son.

One year after the release of “Lullaby for Wyatt”, Sheryl adopted her second son Levi. Levi was just 5 weeks old at the time of adoption. 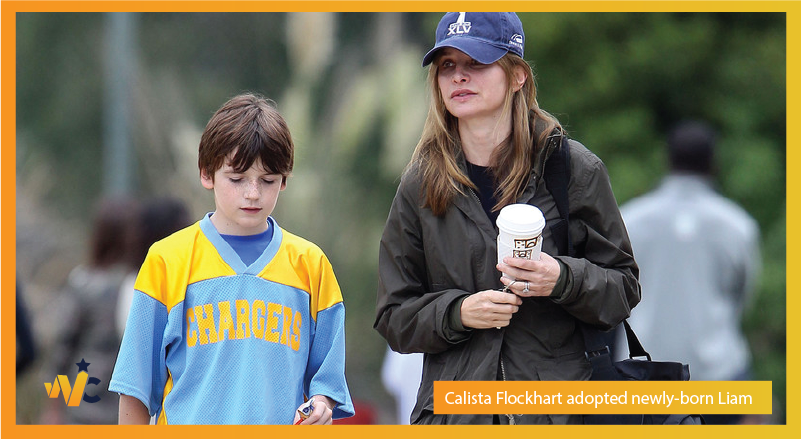 Calista Flockhart adopted newly-born Liam in 2001 before meeting her now-husband Harrison Ford. Ford having four adult biological children of his own adopted Liam as well after marrying Flockhart. The couple married in 2010 and has been together ever since. Liam was 9 years old at the wedding of his parents. 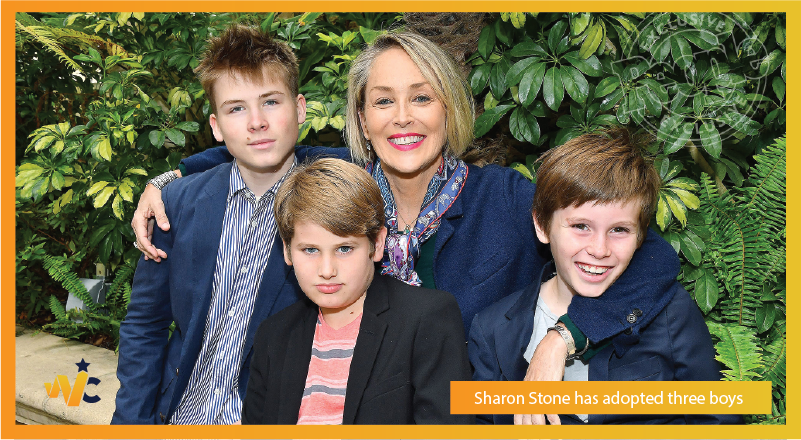 Sharon Stone has adopted three boys; Roan, Laird, and Quinn. She shares the custody of Roan with her ex-husband Phil Bronstein, who was declared the primary custodian after the couple decided to split in 2004.

After getting divorced from her husband, Stone adopted Laird in 2005 and Quinn in 2016. She was presented with the Mother of the Year Award by her three precious boys in May 2017. 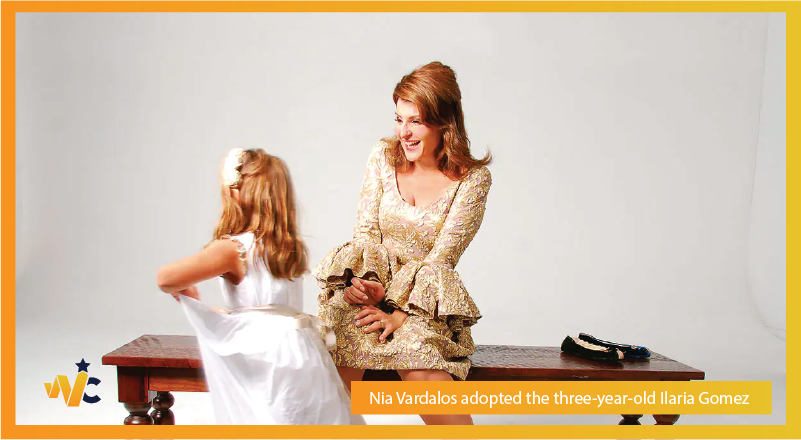 Nia Vardalos is one of those women who have struggled with fertility issues. After 10 years of constant struggle, she finally gave in and adopted the three-year-old Ilaria Gomez in 2008.

The list of heart-warming adoption stories of celebrities keeps going on and on. All these stories tell us and inspire us that there is more than one conventional way to grow a family. Moreover, the adoption can give love, family, and home to many children out there in need of a home. Which of the above adoption story was your favorite? Let us know in the comments below.

[…] – Jesse James in 2005. The couple was leading a blissful life together with their two adoptive children, whose names are Louis and Laila. But in 2010, the couple decided to call it quits for some […]

[…] with Brad, Angelina had three biological children (Shiloh, Knox Leon, and Vivienne Marcheline) and three adoptive children (Maddox, Zahara, and Pax). Anyway, even after leading a blissful life together for a long while, […]

[…] as Anna Kate Denver Hutter, is an American-based celebrity kid – who is famous for being the adoptive child of John Denver (singer, songwriter, actor, record producer, activist, and humanitarian) and his […]

[…] Julia Carey is a loving mother of three and a caring wife, whose husband respects her and always tells the world without any fear that her wife means the world to him. Also, Julia understands that his husband has sacrificed a lot for her and their family. And we guess this is the reason why their family is listed in the list as one of the most loving and adorable families in Hollywood. […]