Pets are very precious for some people. They love them unconditionally. Note here that the common pets across the globe are dogs and cats. Others include birds, fish, or hamsters. However, many people own crazy pets, including famous celebrities. In this article, we have penned down famous people and their pets. Want to know more about this? Scroll down and read it out to know about crazy obsessions of stars.

1. Mark Zuckerberg and the Hungarian dog 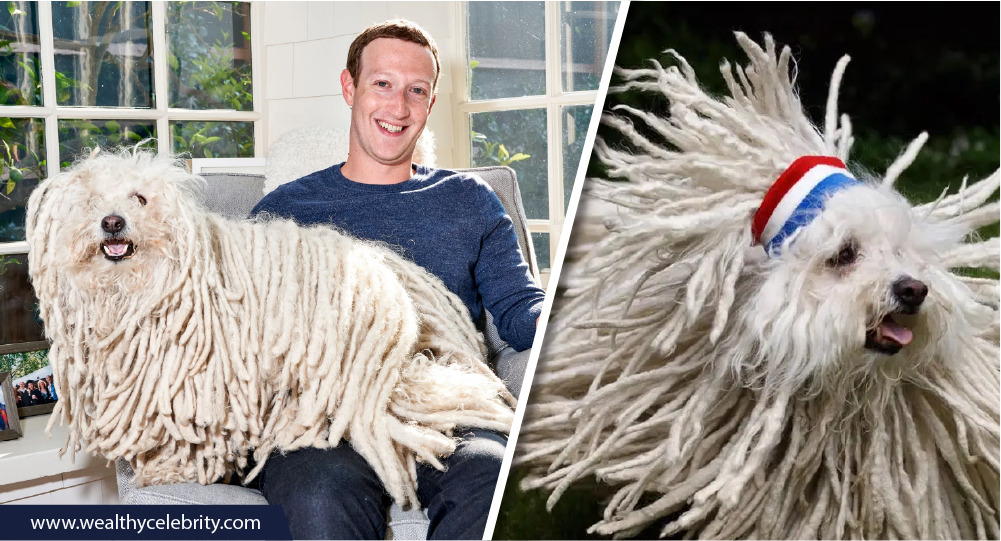 Zuckerberg, the CEO of Facebook, is one of those celebrities who love dogs. He wants the cutest animals to have as a pet; that is why he has fallen in love with his cutest and adorable dog. Its name is Beast, and it is very fluffy. Mark believes in the studies that pets help you to release stress. This is one of the reasons his obsession with pets is increasing day by day.

2. Kim Kardashian and the Chimpanzee 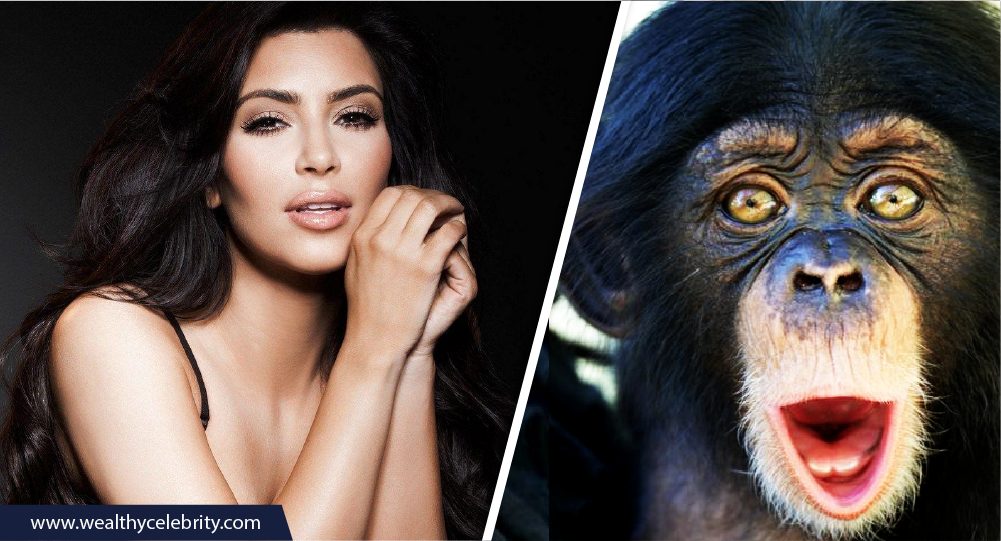 Kim has added another pet to her list of famous celebrity pets. On her website, Kardashian has posted a picture of her Suzy. Suzy is Kim’s baby Chimpanzee. Suzy has caused a lot of agitation in Kim’s life. Kim’s Suzy was hyper-active. Due to this reason, Kim (has a net worth of $900 million and) finds it challenging to take care of her baby Suzy. So, Suzy has left them the next morning.

3. Beyoncé and the Snake 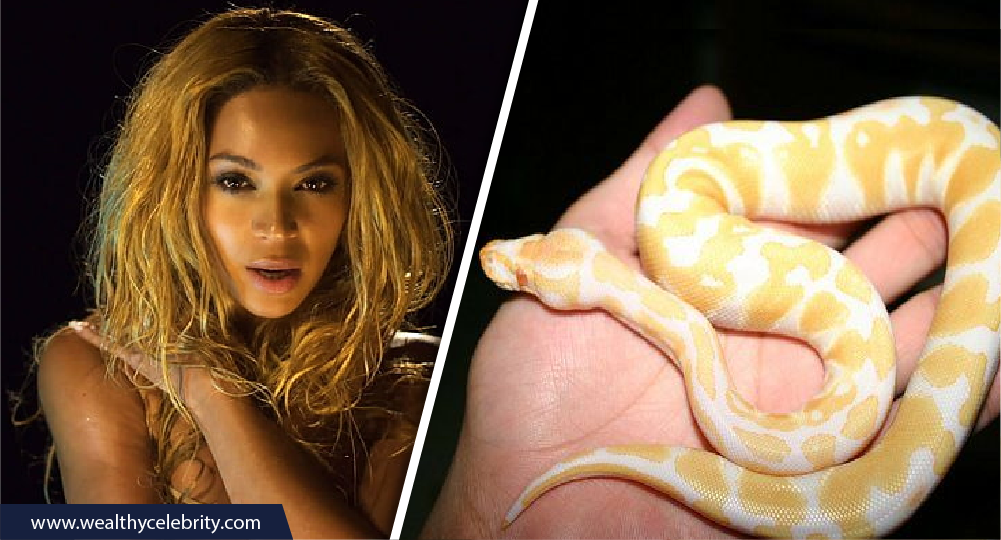 Mostly rich and famous celebs have the craziest interests. Beyoncé is one of those celebs who have the most unusual pets. Beyoncé and her cousin had a snake named Fendi. Queen Bey used to sleep and watch television with Fendi.

Beyoncé, who has a net worth of $400 million, often shows her fondness towards snakes because it reminds them of Fendi. Unfortunately, Beyoncé had to find a new home for her pet because her father was terrified of snakes.

4. Justin Bieber and the Monkey 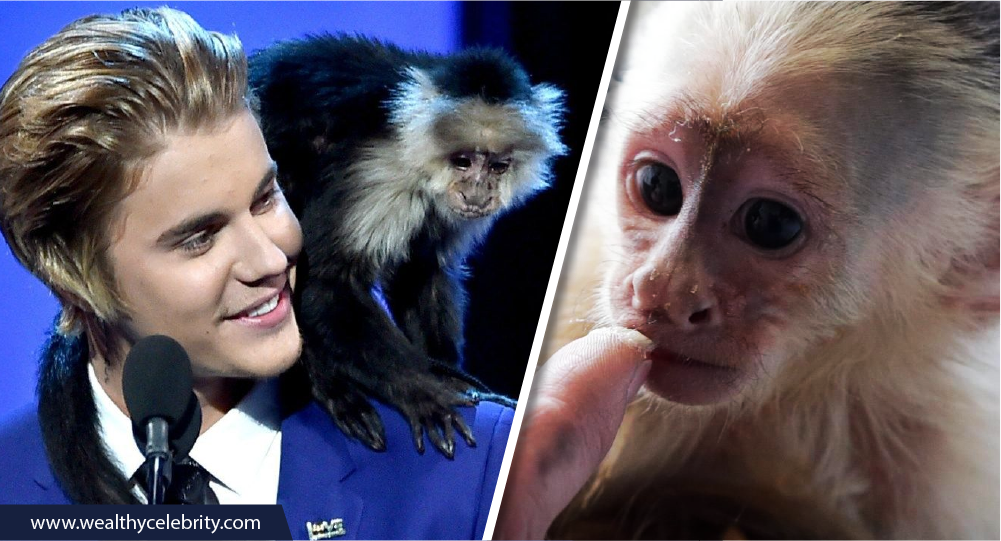 ‘Baby’ singer Bieber has an adorable monkey. Bieber received this monkey as a birthday gift. It is a capuchin monkey. Justin called it OG Mally. Justin Bieber has a net worth of $285 million. He went to Munich, Germany, in 2013. Sadly, the German officials took his monkey. Now OG Mally lives in a German zoo.

5. Leonardo DiCaprio and the Tortoise 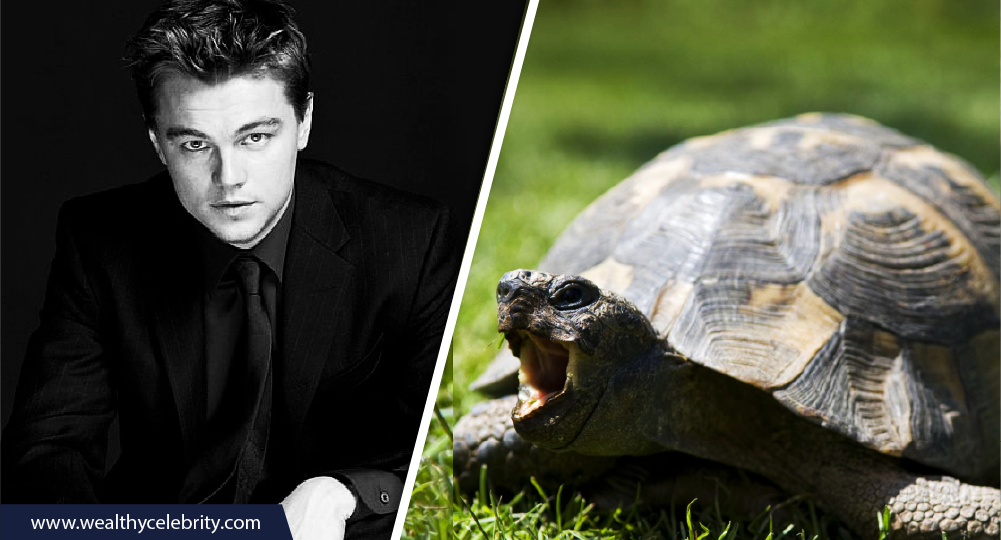 Leonardo is also among those rich and famous celebs who owned crazy and unusual pets. In 2010, Leonardo DiCaprio net worth is $260 million, went to the ‘North American Reptile Breeders Conference and Trade Show.’ This show was held in Anaheim, California. There Leo had paid $400 for a seven years old tortoise. This was an African spurred tortoise. Its weight was only 45 pounds. Do you know that tortoises can live for more than 200 years? Isn’t it surprising!

6. Miley Cyrus and the Pig 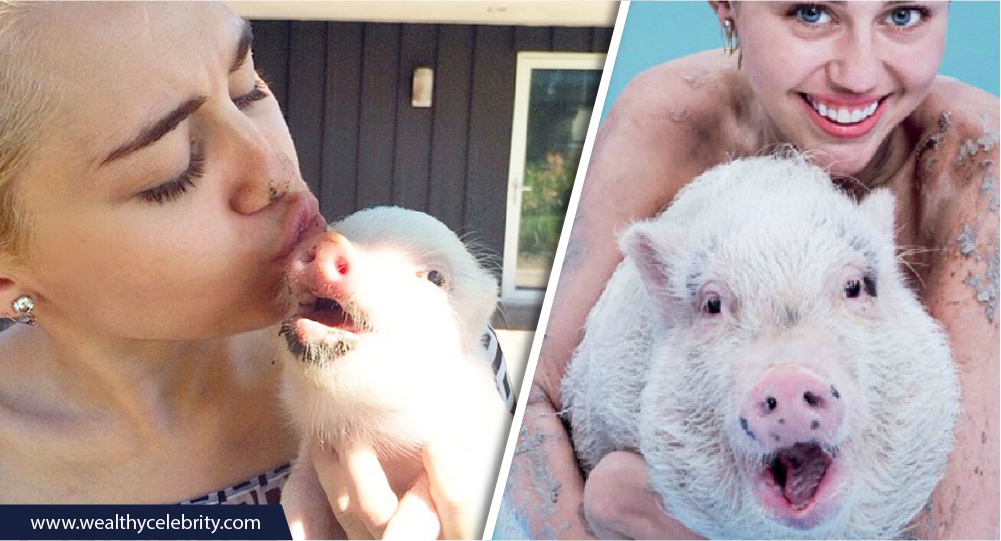 Miley Cyrus is an animal lover. She is one of those celebrities that love cats, dogs, pigs, and whatnot! Miley is crazy about pets. Whenever we talk about famous people and their pets, Cyrus is always on the list due to her love for animals. She even had a blowfish as her pet.

However, Cyrus’s favorite pet is Bubba. It is Miley’s cutest pig. Later, she named her favorite animal the way nature has named it. Means she now calls it ‘Pig.’ Miley has a net worth of $160 million. She has even received the Best Voice 4 Animal Award from Peta. She lives an entirely vegan life. Whether it is about her clothes, accessories, or food, she is a dedicated vegan. Mile’s spirit has promoted veganism to a great extent.

7. Kristen Stewart and the Wolf 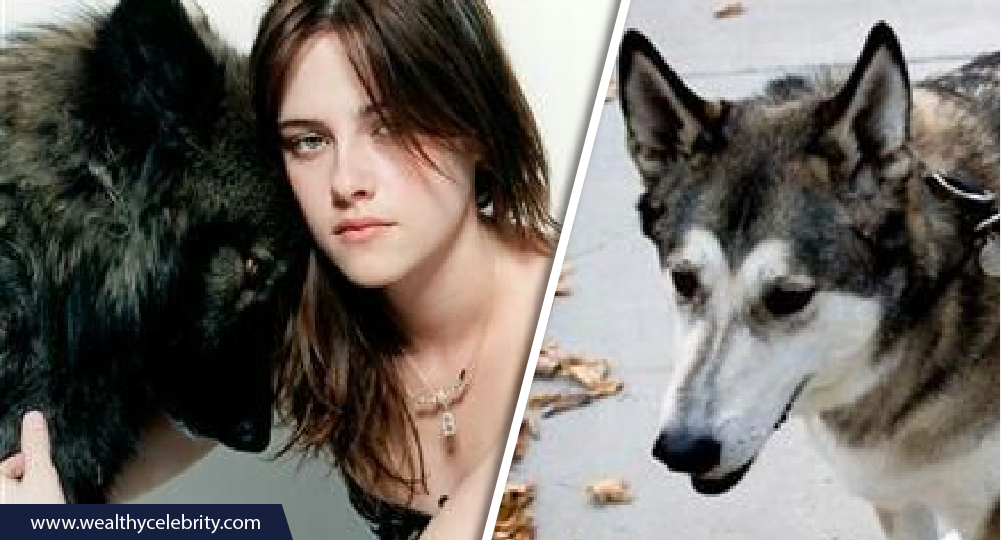 Kristen Stewart has wolves in her home. You might be thinking this fondness is due to her movie series ‘Twilight.’ Well, no! She has received these pets on her birthday from her mom. In an interview with Late Show With David Letterman, she explained that these are wolf hybrids. These are wolf dogs.

Kristen, whose net worth is $70 million, introduced one of her wolves. Its name is Jack. Stewart says that it is her oldest pet. She cuddles with Jack and says it might look scary, but it is adorable. She has raised them like her babies by cooking meals for them and taking extra care of them. Kristen further said that she and her mother got these pets from Florida. 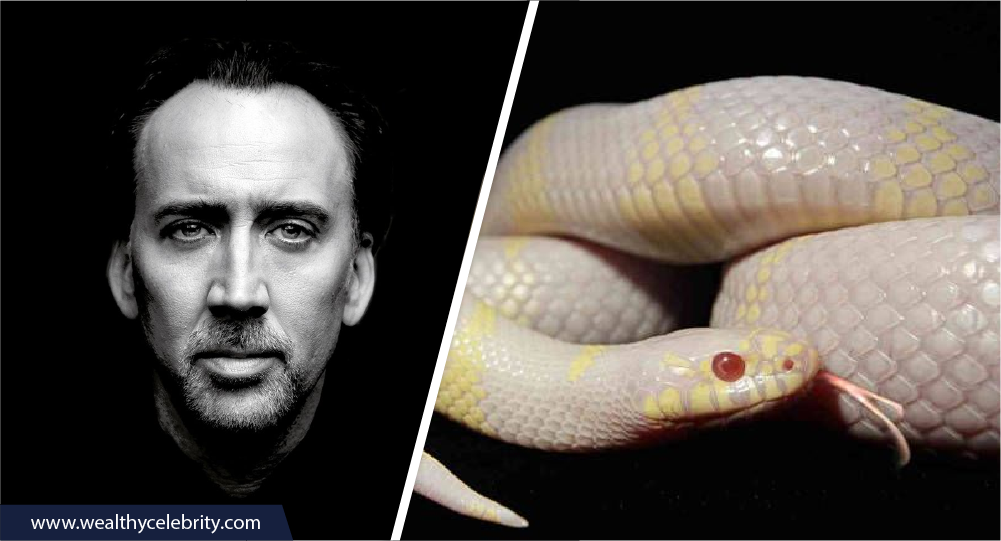 Want to know who has the most unusual pets? Nicolas Cage is the right answer. He has owned many crazy and exotic pets: crocodile, shark, octopus, and the most important, cobras.

Nicolas has a net fortune of $25 million. He has a pair of cobras. These are from the family of Albino Kings. Their color was light pink. Cage was very fond of his cobras.

9. Tippi Hedren and the Lions 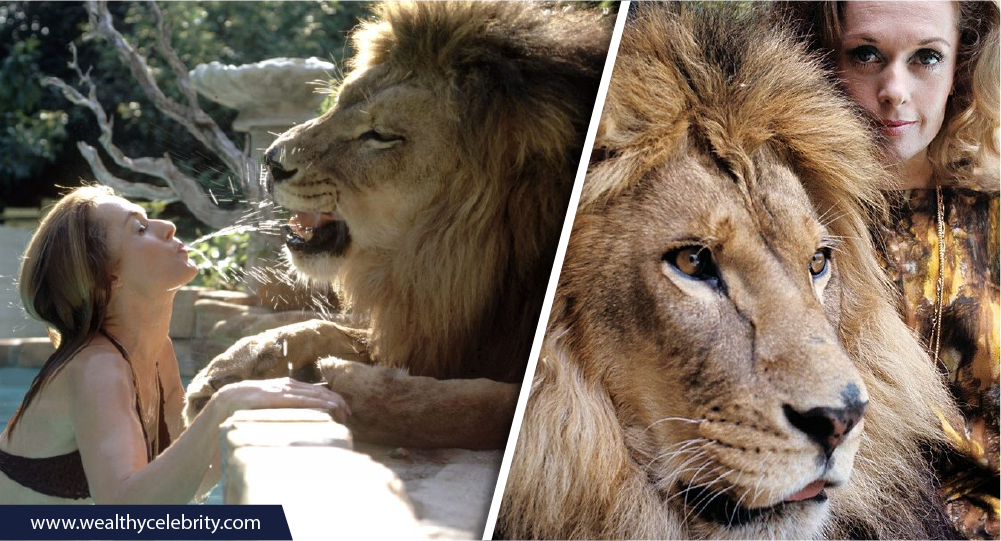 Some celebrities love cats. And other famous people love big cats, which mean lions. Tippi Hedren is a famous name who owns lions as her pets. In 1969 during a shoot in Africa, Tippi had a chance to spend time with the lion. She found this experience very soothing.

As a result, Tippi bought a lion as her pet. She has also made a movie called ‘Roar,’ which is based entirely on lions. During the shooting of the film ‘Roar,’ a lioness had attacked her as well. She received almost 50 stitches on her face for damage repair. After Tippi’s divorce, she changed the family ranch entirely into an animal sanctuary. Tippi has a net worth of $20 million, and she still has her lion pets with her. 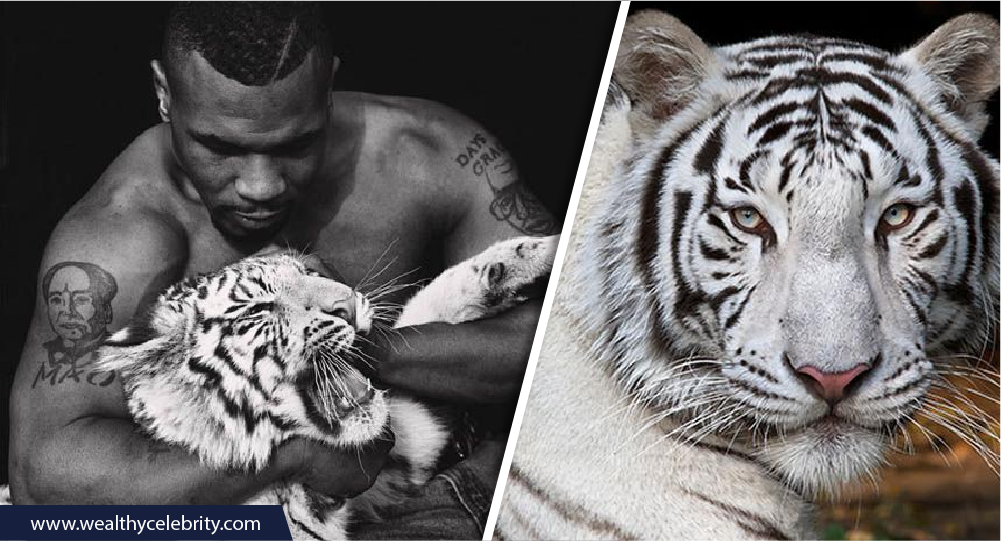 Some people own tigers. Don’t you believe us? Well, Mike Tyson has the Bengal Tiger Cubs. All of them are white. He is so obsessed with his pets. He bought these cubs for $70k. Mike and his pet tigers have also appeared in a movie. Can you guess which movie it is? It is ‘The Hangover’

The famous boxer, Mike, has a net worth of $3 million. He is very fond of pigeons as well. It looks like Mike has a particular affiliation with pets.

So, do you want to have any of these pets? Which is your dearest pet, and what do you call it? Drop your thoughts in the comments box.

What? Are you serious to pet tortoise and snake? Can anybody tell me how these celebrities find time to spend with their pets or I think so they are pets of workers who take care of them. Its kinda strange but out of the whole list I would also love to pet lions or any other big cats like black panthers.

Exactly, we are were shocked as well while writing this article. We never thought that we would find such strange pets list for almost all famous celebrities.

Leonardo's Tortoise is weirdest of them all.