The most problematic habit in the world to kick-off is the consistent carving to ‘Smoke.’ We all know that Cigarettes are pretty unhealthy for the people who smoke and those in the immediate vicinity.

Habitual smoking leads to severe and fatal health conditions such as lung cancer, pneumonia, and emphysema. All these reasons when coming to one’s notice they decided to quit smoking in their life. Thus many celebrities quit smoking cigarettes in their life at a particular moment. How did they take this most significant step of their life, and why did they do so? Here are the stories.

10 Famous Peoples Who Died From Smoking

10 Famous Celebrities who quit smoking and how did they make it possible:

Here are the list of world’s famous celebrities who quick smoking successfully. Robert Pattison is seen quitting smoking in his life to start a healthy life with Kristen Stewart. After their four years of bonding, the world-famous romantic couple from Twilight is looking forward to mingling in the future. Therefore, Robert Pattison opted to practice workout the best way to quit smoking from his life. There are thousands of images of celebs smoking, so he is Robert who feels and looks relatively healthier after kicking off. Rob is experiencing tremendous benefits of quitting smoking as he’s now addicted to exercising and feeling good. According to some sources, there is also some news that Rob has been training with popular celebrity fitness instructor – Harley Pasternak.

2 – Charlie Sheen quit smoking celebrates one year of not smoking: 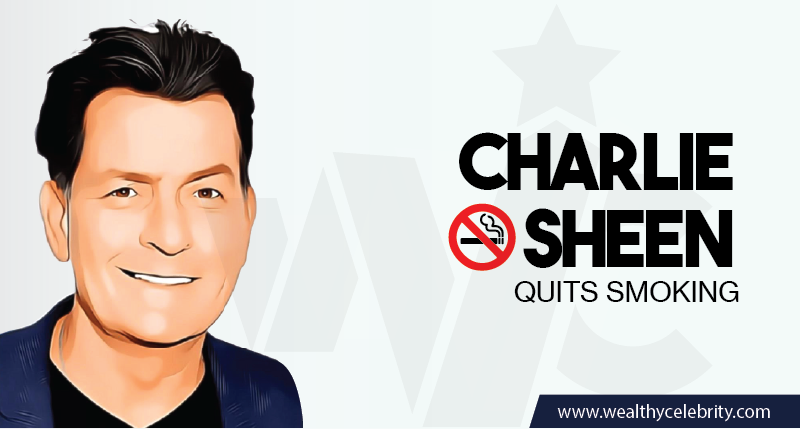 Charlie remarks July 4 as an essential milestone in his life. He celebrates the day each year and expresses regret that he never resumed the habit in the first place. Today, Charlie Sheen quit smoking and encourages others to kick this habit as it’s not going to pay you anything. Here is how the former Two and A Half Men star went over Twitter with the announcement he had been celebrating his Birthday since Charlie Sheen quit smoking in his life.

it was
one year ago TODAY,
that i quit smoking !

if i could go
back in time and
have NEVER STARTED,
i would absolutely do so !

if you are
on the fence about quitting, trust me;
the sooner the better !

3 – Johnny Depp quit smoking habit for the sake of his Children: 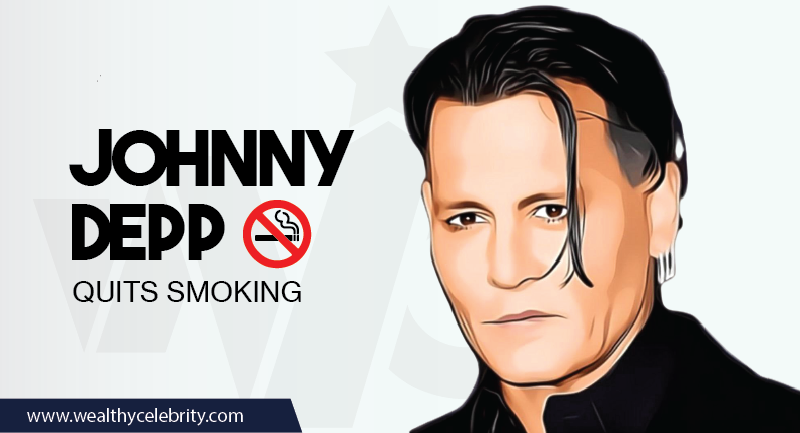 Johnny Depp was one of those great celebrities who smoke cigarettes at an extreme level. However, he is desperate to quit smoking from his life only for his children. Johnny Depp smokes his personal rolled Bali Shag’s, which he’s trying to cut back and stop altogether. Johnny from his real-life daddy’s role says that; “it’s a dumb addiction… and with the kiddies, man, just being a parent – you start worrying 10 years ahead of the curve.” Johnny Depp is blessed with two kids; Lily-Rose and Jack. According to some people, he began smoking at the age of 12 and in no time began to drink and use drugs as well. The cigarette on which he started smoking was Marlboro. After lots of effort, he stepped in massive fame from teen idol life with one of his greatest films, “Pirates of the Caribbean Series.” Besides being a successful actor, Johnny is a part of the music band ‘Hollywood Vampires,’ he plays guitar and sings for this band.

Moreover, Johnny Deep, before quitting smoking from his life, had no shame to admit his massive smoking habit. As in an interview, he joked it in the following words, “I smoke a thousand cigarettes a day. I’m working my way up to ten thousand.” Thus, Johnny Depp is one of the uncountable pictures in the group images of celebs smoking.

4 – Bella Hadid quit smoking after being ashamed at Met Gala: Bella Hadid was one of those celebs smoking images that took over the internet in early 2017. It was from the Instagram post in which Bella Hadid and Dakota Johnson took part in the Met Gala bathroom smoking party. However, smoking has become Instagram fodder for several celebrity influencers. However, that Instagram post proved controversial that New York City’s health commissioners were compelled to take action. Thus, Bella Hadid quit smoking was officially revealed on her Instagram posts captioned as: “I quit” and no smoking emoji sign. This caption accompanied a sultry black and white Bella Hadid smoking photo. We saw everyone appreciating her for kicking her addictive habit. Kristen Stewart quit smoking and her drinking habit on her 30th Birthday. It was the time when Stewart reached the milestone in April while quarantining herself at home. Due to the pandemic situation of Coronavirus, she felt it was the ideal opportunity to overhaul her lifestyle. Kristen to one of those celebs smoking buzz who used to smoke like a chimney. Kristen Stewart’s smoking habit from her desire to have something in her mouth. There are also some rumors that Kristen quit smoking for her boyfriend, Robert Pattison. However, the twilight couple has been regular smokers on shooting sets as well. Stewart is one of the female celebrities who smoke cigarettes and has been slammed for longtime nicotine addiction. Katherine Heigl is a female celebrity who smokes from the age of 25 and admits that she immediately become addicted to it. Katherine Heigl suffered a lot to quit smoking from her life as she tried Wellbutrin, nicotine patch, and nicotine gum, but all went in vain. She said, “It’s so stupid,” to the Washington Post. In the year 2010, she stated in an interview that she was using an electronic cigarette. Although she felt it ridiculous, yet it helped her not to smoke real cigarettes. Finally, when she was pregnant with her son, Katherine Heigl quit smoking altogether. Katherine celebrated her wedding anniversary with the happy thing that she quit smoking and is thankful to God. 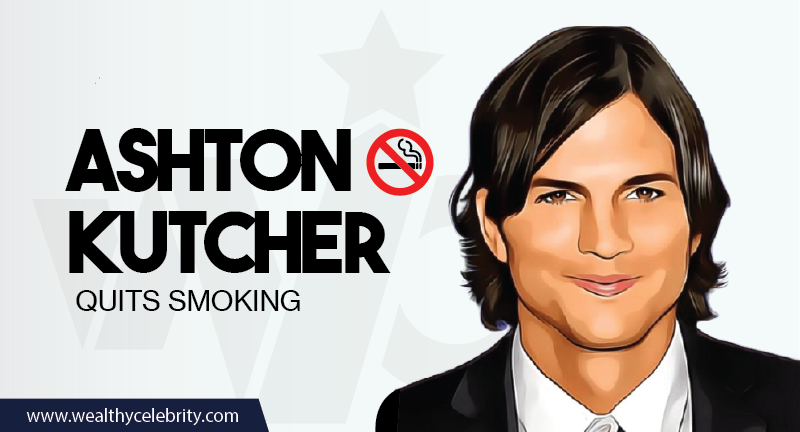 Ashton Kutcher, one of the celebrities who quit smoking in healthy made, successfully goes with Allen Carr’s Easy Way method. Kutcher reports that he used to smoke up to 40 cigarettes a day before he was urged to read Carr’s book, The Easy Way to Stop Smoking. Besides being a celebrity who quit smoking from his life, he still enjoys adult beverages.

9. Lindsay Lohan quit smoking with the help of Hypnotherapy: 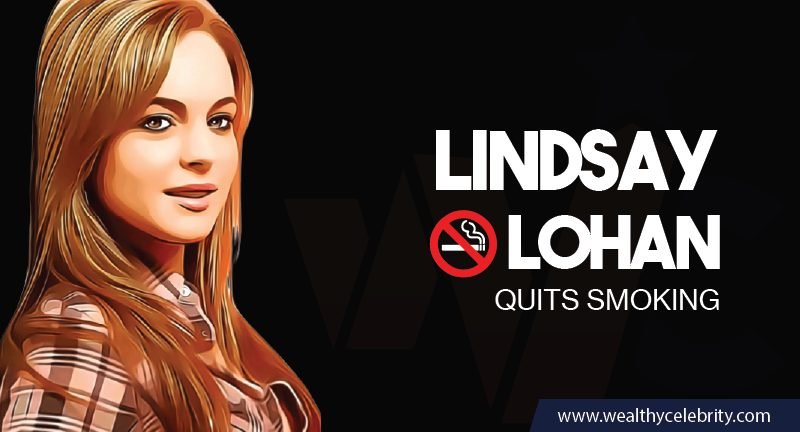 The famous Hollywood celebrity who quit smoking before her debut in West End theatre, Lindsay Lohan, seeks Hypnotherapy to kick off this habit. He took the help of alternative medicine to kick her nicotine addiction from life. Lindsay is one of the celebs who smoke for years; she tried hard many times to quit but never managed to stay away until and unless medicines took over. There is news in the media about her like, “Lindsay knows all eyes will be on her and she’s worried if she starts to crave nicotine on stage, it’ll put her off.” Lady Gaga is seemed to open a new chapter of life by quitting smoking from her life. It seems many female celebrities never smoked in their life. But the bitter reality is that we’ve got a considerable number of female celebrities who smoke cigarettes. The world-famous singer Lady Gaga finally quit her heavy smoking habit and went “cold-turkey” on it. In an interview with Apple Music, she said that “I completely quit – I quit cold turkey. But it was so hard. If you don’t smoke, don’t smoke! Because quitting is worse. It is so brutal. And I’ll never smoke again because I think I saw Jesus for an entire week. It was so awful.” However, she is one of those celebrities who quit smoking in her life after a great struggle. She used to smoke up to 40 cigarettes a day. Thus it was not an easy decision for her to quit.

The best way to quit smoking in life, Lady Gaga found love, her new boyfriend, Michael Polanshy, who was her biggest motivation to kick off her daily habit.

Good encouragement for people like me. Thanks for sharing 🙂